MicroTiles At School Of The Art Institute Of Chicago

As a college of art and design, the School of the Art Institute of Chicago knows how important aesthetics are, which is why it chose Christie MicroTiles as the basis for the video wall in its new LeRoy Neiman Center, the school’s first student hub. 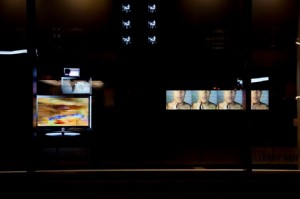 Featuring 16-foot tall windows on both sides of the building, the LeRoy Neiman Center offers Chicago Loop visitors a clear view from the street of what is inside.

With such a large audience passing by throughout the day, SAIC wanted a video display that could be reconfigured into new and intriguing shapes, ‘catching their eyes’ and captivating viewers with an endless collection of innovative, multimedia designs.

“Unlike bulky video monitors and flat panels with thick bezels, Christie MicroTiles are modular products that blend nearly seamlessly with one another, providing artists with a digital canvas of almost limitless shapes for their work,” says Craig Downs, SAIC director of media services. “Exploration is one of the school’s core values, and with Christie MicroTiles, our students can push the edges of ordinary artistic expectations, as they are no longer restricted to a rectangle or single screen. Working with MicroTiles as a video installation medium literally takes the concepts outside of the box.”

With a new architectural environment to call its own and 25 Christie MicroTiles at its disposal, SAIC opened the floor to faculty and students, asking them for designs that would speak to the public and inform them of what the school is and what it does.

Taking advantage of the MicroTiles’ potential for reinterpreting the concept of time and space, instructor Lee Blalock developed a design that broke the first artistic display into three segments, with each array telling its own story – a work made solely with Christie MicroTiles in mind.

“Lee’s piece, ‘Remote,’ really stood out in the selection process, as she clearly realized that Christie MicroTiles are not like other video displays and thought differently about the presentation right from the start,” says Downs. “Breaking away from a linear approach, she focused on depth perception and space, counting on the flexibility of the MicroTiles to play out her work exactly as she envisioned it.”

“The first piece that ran on the MicroTiles illustrated the next frontier of video art, showing students, and faculty alike, new possibilities in delivering digital images, most of which wouldn’t be feasible without this versatile technology from Christie,” says Michael Ryan, director of exhibition curricula and director of the student union gallery at SAIC. “The MicroTiles are a great teaching tool because they challenge the way we normally think about videos and allow our students to expand their skills even more.”

With a team of AV installers arranging the MicroTiles to fit the artist’s vision, SAIC treats the technology as its own exhibition space – putting no restrictions on proposals that embody a freestanding sculptural piece or are part of a window display, as the first two installations did.

“If it is physically possible, technically possible, and we have the space for it, we will try anything,” says Downs. “That is a luxury only Christie can offer with its MicroTiles. They are easy to configure and prove to be cost-effective in their ability to reinvent a display time and again.”

A leader in educating artists, designers, and scholars since 1866, SAIC offers nationally accredited undergraduate and graduate degrees and post-baccalaureate programs to nearly 3,200 students from around the globe. SAIC also enables adults, high school students, middle school students, and children to flourish in a variety of courses, workshops, certificate programs, and camps through its Continuing Studies program.

This entry was posted on Friday, April 19th, 2013 at 10:00 @458 and is filed under DailyDOOH Update. You can follow any responses to this entry through the RSS 2.0 feed. You can leave a response, or trackback from your own site.