Pattison Onestop and Spacing Magazine have launched #DearCityCanada, an innovative cross-country, public art project and dialogue about the cities we inhabit. 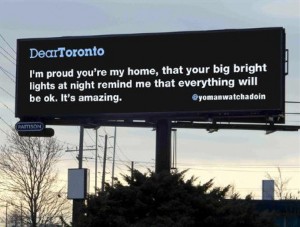 Throughout the summer months, tweeted letters submitted by participants from across Canada will be shared on Pattison Onestop’s network of screens and digital billboards, expressing pride and joy, opinions and criticisms, love and suggestions about Canada’s cities.

Final deadline to submit tweeted letters to the city you love @DearCityCanada is June 15, 2013.

Throughout July and August, tweeted letters by urbanists in 19 cities from coast to coast will be shared on Pattison Outdoor Digital Billboards in the respective cities.

“Spacing is excited by this project because it gets more art into public spaces, and with Dear City Canada, the opportunity to participate is wide open,” says Shawn Micallef, editor, Spacing Magazine. “We hope to see lots of city love — and even some tough love — up there on those screens.” 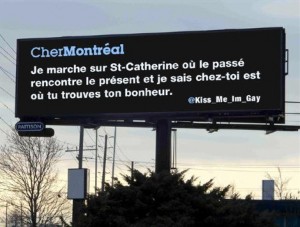 Sharon Switzer, arts programmer and curator, Pattison Onestop, says, “Public space is no longer only comprised of physical structures. Digital screens and billboards offer new sites for public art and an exchange of ideas. Dear City Canada is my first attempt at starting a national discussion about the cities we inhabit. We have been receiving all sorts of wonderful ‘love letters.’ I’m looking forward to sharing @DearCityCanada tweets on billboards and screens across the country this summer.”

From July 29 to August 11, 2013, it will be the billboards of Calgary, Edmonton, Regina and Winnipeg.

Dear City Canada is part of Art in Transit, Pattison Onestop’s ongoing arts and culture program, presenting thought-provoking projects that enhance our shared environment and transport city-dwellers, if only momentarily, out of our daily routines.

Spacing is an award-winning print and web magazine that uncovers the joys, obstacles, and politics of Canadian urbanism.

This entry was posted on Tuesday, May 28th, 2013 at 17:00 @750 and is filed under DailyDOOH Update. You can follow any responses to this entry through the RSS 2.0 feed. You can leave a response, or trackback from your own site.