Coors Light Gets Habs Fans Into The Action

Well, hockey season is almost over, but in Montreal, probably the most hockey-crazed city in North America, it never ends. 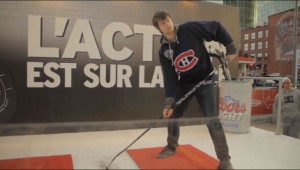 For the last four games of the season – before, unfortunately, the Montreal Canadiens, the most celebrated team in hockey history, was knocked of the running for this year’s Stanley Cup – Molson’s Coors Light brand teamed up with media company MEC Canada and ad agency DraftFCB Montreal to create an interactive outdoor experience called “L’action sur la glace” or “The Action’s On The Ice”, bringing the fans even closer to the action.

Outside of Montreal’s Bell Centre, the home of the Habs (nickname of the Canadiens), Thinkingbox digital production company built a custom 240 sq. ft. ‘shooter’ platform where fans were able to take their best and hardest “slap shot”. Each time, the strength and speed of the shot would trigger a specific 3D animation that appeared on a 45’ HD LED video wall. 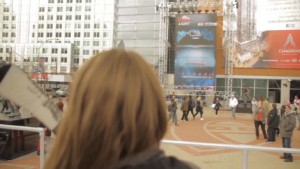 For example, if the puck was hit hard enough to score a goal, an animation showing the ice shattering as well as a 3D modeled representation of Bell Centre and the Montreal Canadiens’ locker room would appear. Everything was done to recreate and simulate the experience of scoring a goal for the average fan.

The activation included a custom iPad application that controlled the flow of the event. It was synced with social sharing technologies so players could publish their experience on their respective social networks. The platform included a puck track containing IR sensors and micro-controllers that converted fans’ shots from microseconds to km/h.

It wasn’t a permanent installation, and was removed when the campaign was over, but in the city with the most diehard hockey fans, it sounds like something that would have attracted fans and tourists all year long.

This entry was posted on Wednesday, June 12th, 2013 at 10:00 @458 and is filed under Scuttlebut. You can follow any responses to this entry through the RSS 2.0 feed. You can leave a response, or trackback from your own site.