eyevis, German manufacturer and installer of large screen solutions that we first met at its launch at #InfoComm11, accompanied the presentation of the Babolat Play connected racket prototype by French manufacturer Babolat VS S.A. during the French Open 2013 from 21st of May to 9th of June 2013 at Roland Garros, Paris with a racket shaped video wall consisting of nine eyevis omniSHAPES, the innovative tennis racket was promoted in the heart of a presentation stand at the tennis tournament. 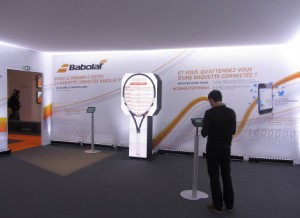 The handle consisted of a 1×3 base of omniSHAPES. On top a 2×3 set of omniSHAPES was attached. To give the set a ’round’ shape like the head of a racket, the outside corners used omniSHAPES with cut-off corners.

This customized video wall was used to show a tweets animation where every visitor could answer the question: ‘What do you expect of the Babolat Play racket?’ Each tweet was first displayed in a prominent position in the upper region of the racket’s head. With every new tweet the previous one slid down and became part of the visual stringing.

To build the racket shaped wall it was necessary to develop a structure that allows you to put a set of 2×3 monitors onto a base that is only one display wide. Additionally it had to be possible to use displays not only with a rectangular shape but also with cut off corners.

To realize the T-shaped connection between the handle and the head of the video wall, eyevis offers standardized connection plates for horizontal steps.

This entry was posted on Monday, July 22nd, 2013 at 08:00 @375 and is filed under DailyDOOH Update. You can follow any responses to this entry through the RSS 2.0 feed. You can leave a response, or trackback from your own site.