When MotoMart purchased its first 19mm color Watchfire LED sign for a station in Belleville, Ill., back near the end of 2010, the colorful messages advertised the company’s popular WAND Card loyalty program. 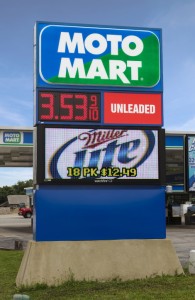 MotoMart, owned by FKG Oil, operates many gas station/convenience store locations throughout the Midwest, and Andrew Wall, faciities supervisor, had wanted to replace the chain’s changeable copy signs with signs that would draw more attention to the stores’ highest margin products, in addition to publicizing its loyalty program. The majority of the chain’s stores had used changeable copy signs to advertise store items, which didn’t keep customers updated because they were difficult to change.

Wall worked with George Lay Signs to find a better signage solution, which it decided was Watchfire LED signs and its Price Watcher gas price signs.

After installing the LED sign in Belleville, sales improved, with customers drawn from the gas pumps into the store to take advantage of special deals that featured the store’s most profitable products.

Hall then decided to give Price Watcher LED gas price signs a try as well. MotoMart purchased its first Price Watcher sign for a store in Godfrey, Illinois.

“We know that when we put promotions on the message centers it definitely drives shoppers to the bargain,” says Wall. “The difference between Watchfire’s Price Watcher and competitor models is how they’re built. With LED signs, the biggest potential failure is from moisture. But, with Watchfire’s signs, water just doesn’t affect it, it can’t get in.”

MotoMart has now increased to a total of eight signs throughout the state of Illinois, each advertising the loyalty card program, company website, car washes, gas prices and in-store deals.

Wall says that MotoMart has seen a definite increase in business from the signs.

And, he says, “A Watchfire sign lets the public get a great view of what we have on the inside and the outside of our store. If we could, we’d buy them for all our locations!”

This entry was posted on Monday, September 23rd, 2013 at 09:58 @456 and is filed under Scuttlebut. You can follow any responses to this entry through the RSS 2.0 feed. You can leave a response, or trackback from your own site.