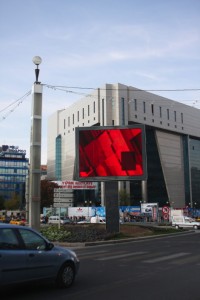 Ströer is currently testing two new digital outdoor advertising initiatives, the first is Outdoor TV launched in Turkey and the second is an Infoscreen network in Warsaw underground stations.

In Warsaw, Poland, 23 x Ströer Infoscreens are available in six underground stations and in a few months time, Ströer will expand the network with 11 additional screens in five more stations.

Udo Müller, Board Chairman of Ströer Out-of-Home Media AG told us “Our pilot projects are a big step towards the digitalization of our media. The most important benefits for our customers include short lead times, more options for campaigns with multiple motifs and individual advertising updates depending on the time of day or the region.”

For all of these projects Ströer used the skills and competence of its subsidiary, Ströer Infoscreen – Ströer Infoscreen itself of course has more than 240 digital screens in underground and elevated train stations, mainline railway stations and airports (and is present in 19 cities across Germany) – easily the market leader in Germany in electronic poster advertising!!

This entry was posted on Wednesday, March 4th, 2009 at 00:08 @047 and is filed under DailyDOOH Update. You can follow any responses to this entry through the RSS 2.0 feed. You can leave a response, or trackback from your own site.