Drivers are NOT distracted by digital billboards alongside roads, according to a new study conducted by no less than the U.S. Department of Transportation. 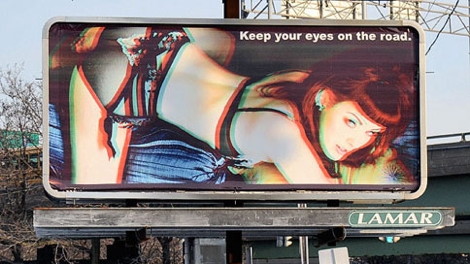 We’ve lost track of how many studies on this subject that we’ve written about over the past years, so let’s hope that this is the definitive one to which people will refer for a long, long time. (We can only wish!)

The study, which was just released by the Federal Highway Administration (FHA), found that drivers are not any more likely to be distracted by digital billboards than by stationary signs.

“On average, the drivers in this study devoted between 73% and 85% of their visual attention to the road ahead for both [Commercial Electronic Variable Message Signs] and standard billboards,” the study says. “This range is consistent with earlier field research studies. In the present study, the presence of CEVMS (ie. digital boards) did not appear to be related to a decrease in looking toward the road ahead.”

The study surveyed drivers in two locations: Richmond, Virginia,. and Reading, Pennsylvania, and found that the average length of time drivers spent looking at digital billboards was 379 milliseconds, compared to 335 milliseconds for standard signs.

The results were both well below the “currently accepted threshold of 2,000 milliseconds,” the study says.

For those who don’t relate to milliseconds, Nancy Fletcher, president of the Outdoor Advertising Association of America, translated for us: “The longest glance in the direction of a digital billboard was 1.3 seconds, well below the safety threshold established in 2006 by the National Highway Traffic Safety Administration (NHTSA). The 2006 report from NHTSA said risk of accidents/near accidents increases with glances in excess of two seconds.”

“The results did not provide evidence indicating that CEVMS, as deployed and tested in the two selected cities, were associated with unacceptably long glances away from the road,” the new DOT study says. “When dwell times longer than the currently accepted threshold of 2,000 [milliseconds] occurred, the road ahead was still in the driver’s field of view. This was the case for both CEVMS and standard billboards.”

The results were welcomed by the Washington, D.C.-based OAAA, which has pushed the transportation department to relax its rules regarding digital billboards.

“Studies have long shown that digital billboards do not cause distracted driving,” the OAAA said in a statement. “The new federal study released on Dec. 30 comes to the same conclusion.”

This entry was posted on Thursday, January 9th, 2014 at 10:00 @458 and is filed under DailyDOOH Update. You can follow any responses to this entry through the RSS 2.0 feed. You can leave a response, or trackback from your own site.