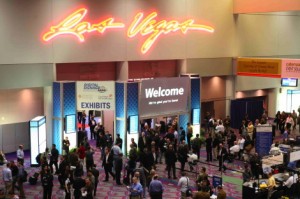 Attendance was down slightly from the 3,500 count a year ago but was not as bad feared and as we have said several times before, the show is in good shape for 2010.

Stephen Randall, CEO LocaModa told us “This year’s annual Digital Signage Expo was a huge success for LocaModa. It was a great show and we got a lot of value from exhibiting as well as participating in several of the conferences.”

Chris Gibbs, President of Exponation, LLC, which produces Digital Signage Expo and its co-located shows was quoted as saying “The increased number of exhibitors and our expanded conference program was a big draw for serious attendees. We hosted over 130 industry experts who presented more conference seminars, workshops and theater presentations than ever before. We understand that more and more people come to Digital Signage Expo to learn and to do business at the show.”

This entry was posted on Friday, March 6th, 2009 at 09:02 @418 and is filed under Scuttlebut. You can follow any responses to this entry through the RSS 2.0 feed. You can leave a response, or trackback from your own site.