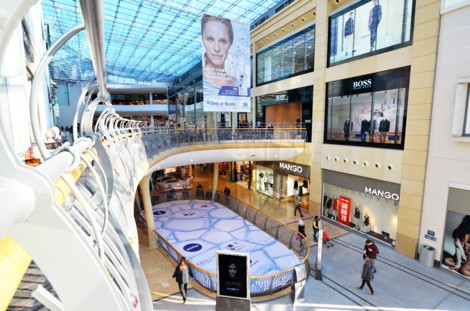 The innovative campaign features a media first for NIVEA with a bespoke branded ceiling panel installed at the Birmingham Bullring (shown above) along with other outdoor media activity taking place at 18 key malls across the UK, including Westfield London.

Locations were selected based on high footfall, spread across the country and proximity to Boots stores (which plays a key part in supporting in-store promotions). NIVEA-branded creative will also run across large scale and Panoramic banners, Adlifts and Limited Space’s network of digital interactive screens – although the centrepiece of the outdoor activity is very much the bespoke suspension installed at the Bullring in Birmingham.

This entry was posted on Monday, January 27th, 2014 at 21:37 @942 and is filed under Scuttlebut. You can follow any responses to this entry through the RSS 2.0 feed. You can leave a response, or trackback from your own site.