Toronto-based Tim Hortons and Cineplex Digital Networks today announced a national launch plan for TimsTV, which will be one of the largest digital programming networks in the Canadian restaurant and retail sectors. 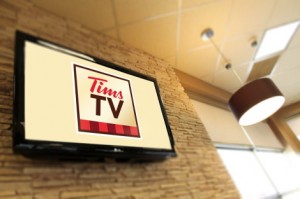 The software management platform is by Cineplex Digital Solutions (formerly EK3, acquired by Cineplex in Sept./13).

Today’s announcement marks the expansion of a successful pilot program of TimsTV launched in 50 Tim Hortons restaurants in London, Ontario, in June, 2013.

Cineplex Media Will sell advertising for TimsTV, opening a new and exciting opportunity for customer engagement in one of Canada’s foremost retail destinations. The network will include a combination of advertising and content. The content will include Tim’s brand values, community messaging such as local sports support, philanthropic support, environmental messaging, Tim’s brands, and more. It can include Cineplex messaging but the primary focus will be to sell advertising to other advertisers.

“We will launch with 15- and 30-second spots but are open to other options depending on the needs of the agency or advertiser,” says Pat Marshall, vice-president, communications and investor relations, Cineplex Entertainment. “Also, all advertising can be GEO targeted so advertisers can go nationally, regionally, local or a combination of options. Like cinema advertising, TimsTV has a captive audience.”

Cineplex Digital Networks will equip each participating Tim Hortons with the necessary equipment, provide network management, as well as maintenance and repair services throughout the duration of the partnership.

Tim Hortons is one of the largest publicly-traded restaurant chains in North America based on market capitalization, and the largest in Canada. Operating in the quick serve segment of the restaurant industry, Tim Hortons appeals to a broad mix of consumer tastes, with a menu that includes premium coffee, hot and cold specialty drinks, specialty teas and fruit smoothies , fresh baked goods, grilled Panini sandwiches and classic, wraps, soups, and other prepared foods. and other food products. As of Sept. 29/13, Tim Hortons had 4,350 system-wide restaurants, including 3,500 in Canada, 817 in the United States and 33 in the Gulf Cooperation Council.

This entry was posted on Wednesday, January 29th, 2014 at 17:34 @773 and is filed under DailyDOOH Update. You can follow any responses to this entry through the RSS 2.0 feed. You can leave a response, or trackback from your own site.