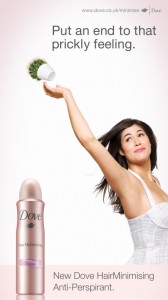 Personal care brand Dove (that’s soap etc. to the majority of us) launched a digital out-of-home campaign on Monday promoting its new HairMinimising Anti-Perspirant Deodorant – if the name of that wasn’t enough to put you off it’s worthwhile catching the really nice graphics created by Grand Visual.

Neil Morris, Managing Director of Grand Visual told us “Using press assets we animated the concept which playfully compares the problem of hair re-growth to a cactus. It features a woman using the Dove hair minimising anti-perspirant deodorant and then throwing away a cactus pot plant”

The campaign was booked by Kinetic and runs for two weeks and supports a broader outdoor push, plus press and TV activity.

Tom Winbow, Head of Digital at TITAN WORLDWIDE told us “After seeing numerous examples from this category where the static poster has simply been used, it is great to see Dove running simple, animated creative across our D6s in Rail and Malls. Which, as demonstrated by our recent eyeball-tracking research study with Kinetic, has been shown to deliver more views and for a longer amount of time, than a static execution.”

Tom of course is referring to the excellent work done by Titan, TruMedia and Kinetic detailed in our post ‘Kinetic Proves The Value Of Digital Posters‘

This entry was posted on Monday, March 9th, 2009 at 17:30 @770 and is filed under DailyDOOH Update. You can follow any responses to this entry through the RSS 2.0 feed. You can leave a response, or trackback from your own site.