We simply love this campaign for Virgin Trains new Virgin High Frequency (VHF) service (a service which is set to go live in May) and is running as a very inventive interactive digital poster up on Ocean Outdoor’s giant LED screen in Liverpool put together by MCBD/Elvis and Manning Gottlieb OMD. 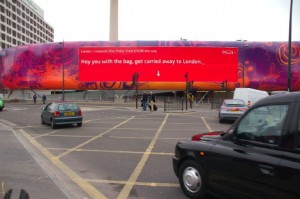 Hey you with the bag

Take a careful look at this first picture shown on the right, note the white cursor / arrow, bottom and centre of the billboard and if you can read it, the text on the poster which says “Hey you with the bag get carried away to London”.

The screen effectively ‘talks’ to the audience – it’s the first time that this space has been used in this way AND in actual fact it is the first time we have heard of anything like this having been done before. 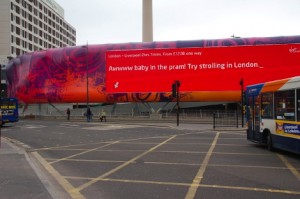 Awwwwww baby in the pram!

In this second picture shown on the left the screen says “Awwwwww baby in the pram! Try strolling in London” – the cursor will typically point at people, cars and buses around the poster and then the screen will deliver a personalised message tied into Virgin Trains quickest ever route from Liverpool to London (2 hours 7 minutes should you be interested) 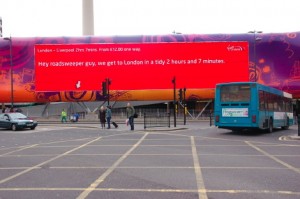 Pre-programmed message templates include; “We’re faster than that number 45 bus” or perhaps, if there is a someone on a bike, the poster would say, “We’re faster than you mate” although our absolute favourite is this one shown on the right which, having spotted a roadsweeper to the side of the poster simply says “Hey roadsweeper guy, we get to London in a tidy 2 hours and 2 minutes” (it was the ‘tidy’ bit we especially liked).

The advert is up for two weeks at Liverpool Lime Street Station from 9th March and was created by John Treacy and Rick Kiesewetter (who are both creatives working out of Elvis communications).

We love this and are hoping to further cover this with the launch film that is being produced by Toast TV and Jeremy Dunn.

This entry was posted on Thursday, March 12th, 2009 at 17:03 @752 and is filed under DailyDOOH Update. You can follow any responses to this entry through the RSS 2.0 feed. You can leave a response, or trackback from your own site.