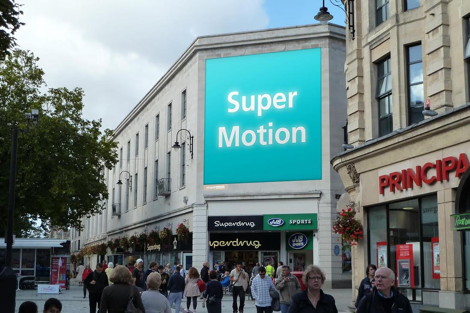 Katrin Robertson, CEO of blowUP Media,told us “The new Queen Street site is a first for the Out Of Home industry in the centre of Cardiff. It is a clear demonstration that our growing Super Motion digital network can enhance city centre environments as well as introduce valuable commercial investment.

She continued “We are now developing a large portfolio of Super Motion screens throughout Europe, all located within the immediate vicinity of very high pedestrian footfall and the point of sale.

The new screen, to be officially launched on March 31, is part of blowUP’s Super Motion network which offers some of Europe’s biggest digital screens including the recently-unveiled ‘The WOW’ in the centre of Rotterdam.

The 6-square-metre 10mm SMD LED video display was manufactured and installed by Daktronics.

This entry was posted on Wednesday, March 19th, 2014 at 06:54 @329 and is filed under DailyDOOH Update. You can follow any responses to this entry through the RSS 2.0 feed. You can leave a response, or trackback from your own site.