I’m really looking forward to attending Scala Americas Partner Conference which kicks off this week in Austin, Texas, April 2 and 3, both for the event itself and the people I’ll meet, as well as it being my own first visit to the Lone Star State. 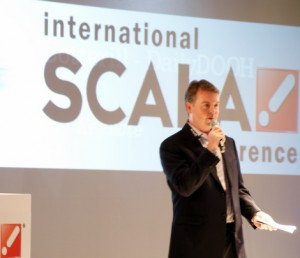 Tom Nix at the 2011 Scala Conference

I’ve covered a couple of these Scala partner conferences in the past (Philadelphia and Noordwijkerhout near Amsterdam – the latter for Scala EMEA) and they’ve been more than interesting, both from what Scala spokespersons had to divulge and (even better) what various Scala partners had to say.

Certain things really stand out in my memory: a speech by Peter Cherna, Scala’s vice-president research and development, and another by James Fine, president, with Stéphane Bastien, technical director, of Telecine and a Scala partner, as well as the launch of the intriguing little COMMcaddy, which I discovered among a small group of exhibitors in Philadelphia. Plus, of course, there was the official introduction of Tom Nix as head honcho of Scala, taking over from Gerard Bucas.

So what will this event – being held at the AT&T Conference Center in Austin – produce? The official agenda hasn’t yet arrived, although we know that there will be a welcome reception and cocktail hour on Tuesday evening before the real work begins. There will be keynotes from Bryan Eisenberg on ‘The Future Shopper: How Offline is the New Online‘ and other, various Scala executives; technical breakout sessions with Scala R&D and Scala services experts; sales breakout sessions with Scala sales leaders, and, I hear, a pub crawl down famous 6th street in Austin – now that latter doesn’t sound like too much work, Ed.

Cowboy boots, 10-gallon hats and country music: sounds like a place for me to love. Reservations are made. If you are going, drop me a line, I look forward to meeting you there!

This entry was posted on Monday, March 31st, 2014 at 06:00 @292 and is filed under DailyDOOH Update. You can follow any responses to this entry through the RSS 2.0 feed. You can leave a response, or trackback from your own site.