Users of mobile often connect their phones to various screens, so, while he made minimal reference directly to digital out-of-home, a talk at Scala Americas Partner Conference by Michael Hess, vice-president consulting services at Qualcomm, gave a solid picture of what is going on in his own backyard. 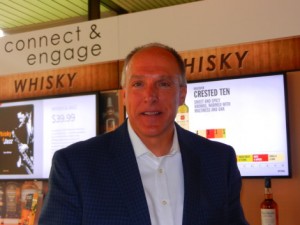 Qualcomm, a $25 billion company that annually spends $5 billion on research and development, develops the inner workings of the various brands of mobile phones and smart phones. Hess is part of a division that focuses on the retail industry, with a personal role to bring mobile to the digital and physical world.

“25% of Internet traffic is coming through mobile,” Hess said. “Plus there’s more video and pictures out there, plus social, plus news, so Qualcomm is studying how to deal with it all – beyond the need for much more bandwidth.

“Mobile has sparked some of the most disruptive change in retail since the introduction of common credit,” Hess told the conference attendants made up of both Scala partners and Scala staff from North, Central and South Americas – in addition to a few Europeans. “Retailers are trying to figure out how to use it. 80% of consumers use a smartphone to deal with shopping in some way. One-third of consumers use it to get assistance about they are considering.”

Privacy and value are a big part of the information exchange, said Hess. But, when people are dealing with retailers, they like offers to be personalized. Mobile’s influence goes beyond direct sales. 25% of ecommerce traffic comes from mobile, but it’s not actually conducting that level of transactions.

Hess spoke of consumer engagement, what retailers offer compared to what consumers want, loyalty programs and other topics, and then introduced the audience to the Gimbal platform, an all-in-one solution for retailers, which includes geofencing, profiles, proximity, consumers’ personal points of interest, the consumers’ Internet, communications ability and more. Gimbal is certified as an iBeacon and also has its own Beacon. Qualcomm supports both.

And Hess caused a rush to the stage when he offered 50 Beacons for free to Scala partners to try out with their customers. Naturally, the demand was greater than the supply!

This entry was posted on Monday, April 7th, 2014 at 10:00 @458 and is filed under DailyDOOH Update. You can follow any responses to this entry through the RSS 2.0 feed. You can leave a response, or trackback from your own site.