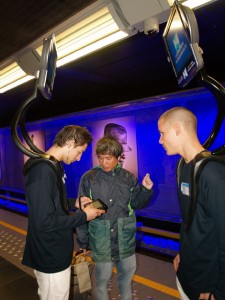 On 2nd April, the new metro in Brussels (STIB) received a royal visit. King Albert II inaugurated the new metro and the metro station Gare de l’Ouest (by the way that is NOT the King in the picture on the blog).

Cubb had 6 Cyklop™ systems complete with Cytouch™ interactivity which showed off the new website www.lenouveaumetro.be and to help people with wayfinding.

This entry was posted on Wednesday, April 15th, 2009 at 00:29 @062 and is filed under DailyDOOH Update. You can follow any responses to this entry through the RSS 2.0 feed. You can leave a response, or trackback from your own site.