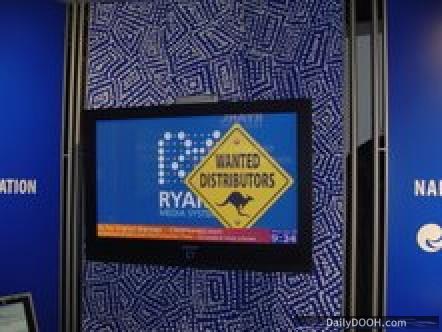 Ryarc Media Systems have no problem in advertising their need / desire for Distributors. The above photo was taken on their stand at ISE, Amsterdam. We see also from their latest press release that Ryarc will be at Digital Signage Expo, Las Vegas with the Advantech folks on booth No. 250

Ryarc will exhibit at the Digital Signage Expo in Las Vegas

Ryarc will be demonstrating the latest version of CampaignManager (to be released in March) and looks forward to meeting attendees and fellow exhibitors during the expo. Ryarc is searching for value added resellers and distributors to maximize the growing digital signage market and invite anyone interested to visit them at booth #250.

Ben Mooney, Sales and Marketing Manager of Ryarc said “We look forward to the Digital Signage Expo. This year Ryarc will continue to grow its market share by partnering with suitable resellers and distributors. DSE will give us an opportunity to meet with potential partners and build upon existing relationships.”

Ryarc’s CampaignManager has been designed from the ground up to be instantly familiar to users of common PC applications. No specialist training or knowledge is required. Combining a user friendly interface with unparalleled scheduling power and flexibility, CampaignManager is the clear choice whether you wish to run a single display, or a global digital signage network.

The Ryarc team has been working on CampaignManager since 2001. Ryarc has representatives in Australia, New Zealand, US, India, and the European Union. Each year, Ryarc technology helps enterprises deliver over a billion media impressions to people in retail, hospitality, airports, waiting areas and public spaces.

This entry was posted on Monday, February 18th, 2008 at 08:42 @404 and is filed under Scuttlebut. You can follow any responses to this entry through the RSS 2.0 feed. You can leave a response, or trackback from your own site.