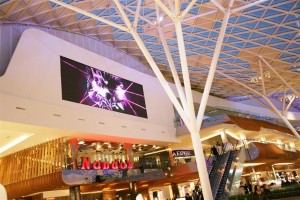 Westfield is not a shopping mall – it’s too big, it’s vast, it’s huge – it’s a complete ‘quartier’ with all its shops, restaurants, cinemas AND with its own park benches and walkways as well it is very definitely its own village and, dare I say it, as an Englishman living in Paris, unlike the rest of the UK, it is impervious to rain!

Thanks to the consideration of the Aussie developers, the huge volume in the central area is covered at such a height that you hardly notice it (the rain that is!).

The Village, incidentally, is even more of a misnomer – it’s a ghetto of exclusivity featuring top brands such as Dior, Gucci, Prada, Tiffany & Co. Versace, Luis Vuitton – with Concierge, Handsfree Shopping , Home Delivery Services, and even a Chauffeur Service – all accessed via the Valet Parking zone…

We’ve written here quite a lot about its roll-out and some of the individual installations, but six months on, I wanted to see for myself how (in particular) the CBS Outdoor/Alive installs were faring and how the centre itself was weathering the crisis.

So again after getting over my first impression of light and spaciousness, I did notice the various screens that have been strategically and discretely placed throughout the ‘town’.

I’d heard from CBS Outdoor/Alive’s Nicky Cheshire about how they had been involved in planning the positioning of the screens at the early development stages, which had a distinct advantage when it came to the physical installation – all cables etc. completely invisible but I imagine that it’s easier to decide where to place your screens when you can just walk around. 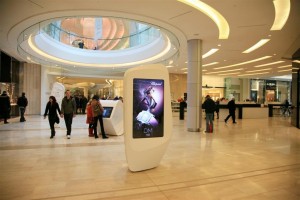 I wasn’t too surprised to learn that out of the 110 screens initially planned, only 99 have been installed at present – though I understand that more will be added later. This was because the builders seemed to have been creative in their interpretation of the architect’s wishes, but also because, as the building materialised, Alive intelligently revised the numbers downwards to avoid clutter.

The result is that they manage to blend in with the surroundings and yet still attract enough attention to demand being seen.

I was very struck by the Pods (57? Samsung HD screens encased in Corian). Far from resembling Stonehenge, I thought more of a Henry Moore sculpture – I felt compelled to touch them – they really add some class to the venue, unlike some installations which make everything look like a betting shop 😉

The venue now also features 3 large format LED screens in key locations – the ‘Centre Spectacular’, the ‘Entrance Landmark’ and as of last week, the third and final screen, known as the ‘Atrium Landmark’ is operational, located in the atrium between the Apple and Nike stores.

This third screen offers the greatest levels of dwell time, being opposite ‘The Balcony’ – Westfield’s swish food court and close to many of the various seating areas. 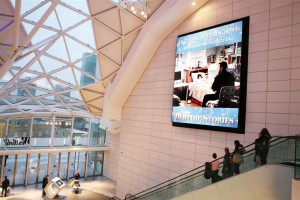 Having invested some GBP 6 Million in acquiring the rights CBS Outdoor/Alive has a vested interest in its success.

CBS Outdoor/Alive exclusively run all of the sites in public areas (except the touch-screen maps) with the only (obvious) restriction being that they can’t accept advertisers not connected to the mall in some way.

On the other hand, whilst individual retailers at the site are free to create and run their own screens within their stores, they can only promote their own goods and services and are not allowed to accept third party advertising.

CBS Outdoor/Alive’s Lee Cutter is quite bullish about the quantity, quality and diversity of the advertisers they have attracted so far, he told me ”The real success is the range of categories we’ve taken, yes fashion and beauty, but also top end luxury (GBP 1400 BA holidays only running in the premium press AND Westfield, to Tiffany & Co, Yves Saint Laurent, Bulgari & Chopard)”

And they seem to produce results too – a recent campaign by Warner Music and HMV produced a 75% sales uplift at the HMV at Westfield compared with the average at other HMV stores. 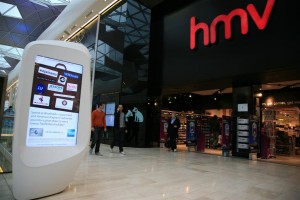 I was intrigued by the enterprising use of the network for narrowcasting by zone – not only is it possible to book a campaign which targets screens within the vicinity of a certain outlet, but the whole place is so vast that some retailers are advertising their stores to direct foot traffic from the other end of the venue …!

I was also impressed by Alive’s attitude to the creative aspects of campaigns. Rather than just offering up their space on a ‘take-it-or leave-it basis, they are very keen to make the most of the creative opportunities offered by digital screens. Lisa Rokny has a creative agency background, and sees herself as a facilitator “I ask clients to let their imagination run wild and let me know how they’d ideally like to see their campaign. Then it’s up to us to make it work”

Whilst the opening day attracted some 4 million visitors (!); weekly footfall has now steadied at a healthy average of 500,000 per week (with some seasonal variations).

The centre is decidedly upmarket, with 66% of people coming from the two most affluent ACORN groups and a basket level of GBP 130 – which must be the highest in the UK surely, Ed

Paradoxically, some 85% of visitors arrive by public transport, meaning for those users the Bus and Tube they’ve already been targeted by CBS Outdoor/Alive on their way there!

Bottom line I came away from my visit overwhelmed by the scale of it all, impressed by the quality of the installation and thinking about Supertramp’s response to the troubled times of the mid 70’s – ‘Crisis, What Crisis?’

This entry was posted on Thursday, April 30th, 2009 at 00:18 @054 and is filed under DailyDOOH Update. You can follow any responses to this entry through the RSS 2.0 feed. You can leave a response, or trackback from your own site.