Anything New At InfoComm This Year?

A common question we get asked by those who don’t go is “was there anything new this year?”. Well, 29,100 folks braved the heat and humidity of Orlando, Florida to visit InfoComm last week (yes, I know someone has to do it) and as with the year before we think it was well worth the time spent.

It’s strange to us that many of those in our industry who did not exhibit (and we fully agree that exhibiting at an AV show such as this is not for everyone) did not attend themselves to walk the floor. First it’s a great networking experience, second there are lots of display products worth looking at and thirdly if you can get invited to the private / closed ‘whisper’ suites you actually get to see things new! 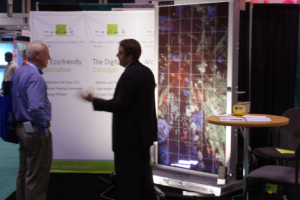 There was surprisingly little new on the actual show floor. Magink were serving up their next generation of full color reflective digital ink displays but with their travails in the outdoor media sector of the past we doubt they will have much impact going forward unless they do something really radical in how they promote, market, brand and sell it.

Showing a 1.5m x 2m square Magink unit (as shown in the picture above) is absolutely not a good idea. Magink needs to be shown from a distance and needs a large display to do it justice – the demo unit which they had hinged in the middle for ease of transportation (showing that it was built for the benefit of the exhibitor NOT the customer) looked tired, complete with a couple of damaged tiles and of course close up the tiles look tiny and the seams huge. It was completely uninspiring. As is unfortunately typical with engineering led display companies, awful content and no brand values whatsoever – they seem to forget that they are trying to sell things to people where brand and marketing is REALLY important!

There were two demonstrations on the show floor that really did stand out for us though. The first of these was on an overall very impressive Samsung stand. They had a giant video wall with content running from 4 laptop computers. Using CAT5 connections and some special software (from Hiperwall) on another computer allowed the content on the laptops to be displayed in an infinite number of variations on the video wall. Bottom line a cheap and easy way to do control rooms, corporate and retail installs – especially where performance of say, something like a Christie Vista Spyder is not required. 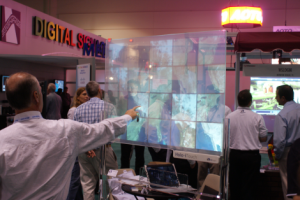 vislogix’s Holo-iTouch is described as “much more than just another transparent touch screen” and although it looked to the uninitiated as a piece of rear projection / smoked glass the stand was packed every time we walked past. We liked what we saw and how it was presented. A fantastic lesson for those who want to create a buzz around what they do!

In the private screening rooms and ‘whisper suites’ we were privy to a number of new display technologies some of which excited and some of which did not.

Either way we are under NDA and cannot say much but will leave you by saying shape is the new king – something which we predicted in 2008 for this year – let’s just hope they launch soon so we can be proved correct!

This entry was posted on Monday, June 22nd, 2009 at 11:43 @529 and is filed under DailyDOOH Update. You can follow any responses to this entry through the RSS 2.0 feed. You can leave a response, or trackback from your own site.

2 Responses to “Anything New At InfoComm This Year?”