I Feel Like I Am Pooping In A Beautiful Meadow

OUTFRONT Media Inc. (NYSE: OUT) is currently deploying an exclusive out-of-home campaign with Poo~Pourri, the original before-you-go toilet spray. The station domination campaign took over the Bedford Avenue station in Brooklyn recently, and is also strategically located in major cities such as Atlanta, Houston and in Dallas, where Poo~Pourri is headquartered. 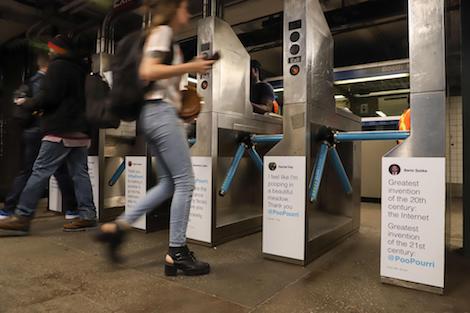 Designed by Poo~Pourri’s in-house creative team to resemble an IRL twitter feed, the campaign features tweets and testimonials from real Poo~Pourri fans, and highlights the more than 20,000 five-star reviews that the product has received. It will run through the end of the summer, and is featured on static billboards across each city, as well as posted on turnstiles and pillars throughout the Bedford Avenue subway station. New Yorkers and tourists alike can now see the hysterical first-hand reviews from customers who have transformed the bathroom experience by using the cult-favorite product.

Poo~Pourri SVP of Creative an Marketing Nicole Story said “Our goal with this ‘Poo Love’ campaign was to reach a broader audience by creating eye-catching ads which highlight the people that know us best – our very happy customers. OUTFRONT Media was a strategic partner and understood our goals, helping us execute a fun and seamless campaign in some of America’s top cities.”

In Poo~Pourri’s first out-of-home advertising campaign, OUTFRONT Media collaborated with the brand to raise brand awareness and reach a mass audience in key markets. OUTFRONT Media’s out-of-home assets are a one-to-many medium with the capabilities of feeling like a one-to-one medium, allowing creative to really engage consumers personally wherever they are in their day.

Jodi Senese, Chief Marketing Officer at OUTFRONT Media told us “In the age of influencers, there is an authenticity to using real life people in campaigns. We’ve seen great success with this strategy in the past, and we are in a position to help execute these in the right areas to make the most impact. New York City, in particular, is a mecca for every demographic and by leveraging our transit inventory, Poo~Pourri is able to spark conversations and brighten the commuter journey with a bit of humor.”

Poo~Pourri was founded by serial creator Suzy Batiz in 2007. With 350 million combined video views and over 60 million bottles sold worldwide, Poo~Pourri has become an internationally-known, category inventor and start-up success transforming the way we all think about pooping. Poo~Pourri is sold in 40,000 retail locations in the US including Costco, Target, CVS, Walgreen’s, Bed Bath & Beyond, Ulta, Amazon.com (with over 20,000 5-star reviews!). Poo~Pourri earned the Good Housekeeping Seal of Approval in 2013 and an Edison award in 2014. The company has been ranked on Inc.’s 5000 Fastest Growing Companies since 2015 and is certified as a Women Owned Business (WBENC).

This entry was posted on Monday, June 10th, 2019 at 09:06 @421 and is filed under DailyDOOH Update. You can follow any responses to this entry through the RSS 2.0 feed. You can leave a response, or trackback from your own site.