BMW Canada, based in Whitby, Ontario, is using two LCD screens near an outdoor display of the new BMW Z4 roadster in Toronto to entice people to register for a test drive – it’s all part of BMW’s ‘An Expression of Joy’ campaign which began in June. 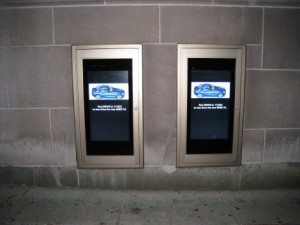 The campaign, which ends Aug. 31/09, has resulted in a 12.5% test drive conversion rate for those customers texting in to experience a test drive with the new BMW Z4. (In June, BMW led the Roadster segment with Z4 sales and outsold all competitors combined. Canadian sales of the BMW Z4 roadster were up 283% compared to June/08.)

Since April, a BMW Z4 roadster with a retractable hardtop roof has been on display outside the Fairmont Royal York Hotel in downtown Toronto. Now, five Z4 videos on are running on the two 40” screens to capture the attention of 12,000 passers-by each day. The screens are located beside the car on Fairmont’s historical flagship property, located in the heart of downtown Toronto at the corner of Front & York Street.

Each video also engages the consumer with a call to action, inviting customers to text ‘Drive’ to 111222 to book a BMW Z4 test drive. Once they text, customers automatically receive confirmation that they will be contacted by their nearest BMW retailer.

The videos highlight different features of the newly redesigned Z4, such as the retractable hardtop roof, the interior and the award winning engine. In addition, there is a making of video that shows creative navigator, Robin Rhode, using the Z4 as his paintbrush to create an art motif entitled ‘An Expression of Joy’. 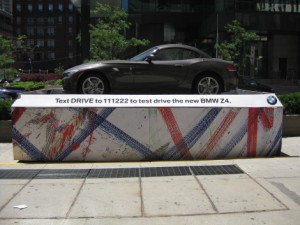 The vehicle display itself also has a new look. The bottom of the display casing is wrapped in an explosive, vibrantly coloured tire track design on an enormous canvas, complimenting the An Expression of Joy campaign.

BMW’s agency of record, Cundari, Toronto, coordinated all elements of the campaign and produced new creative for the Z4 videos that is integrated with the current An Expression of Joy campaign. Cundari worked with Novramedia to stream the five unique videos live to the screens and with Vortex Mobile to launch and manage the mobile marketing campaign components.

This entry was posted on Thursday, July 16th, 2009 at 07:00 @333 and is filed under DailyDOOH Update. You can follow any responses to this entry through the RSS 2.0 feed. You can leave a response, or trackback from your own site.