A joint advertising campaign by Living Wage Foundation and Clear Channel has been unveiled today to coincide with Living Wage Week. 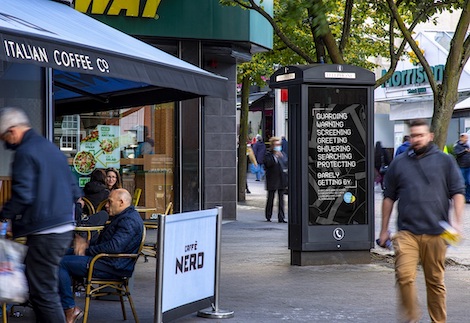 The aim of the campaign is to highlight the important work of many low paid ‘key workers’ such as cleaners, care workers, and delivery drivers who are working on the front line during the pandemic but still not getting the pay they deserve. We were keen to make sure we evoke empathy with all the people that have been there for us – whilst highlighting the harsh reality that many of these ‘key workers’ face low pay and are struggling to get by. The campaign gives people the chance to reflect on the hard work of our essential workforce, and for employers to commit to becoming a real Living Wage Employer.

Laura Gardiner, Director of the Living Wage Foundation told us “At a time when many of us are once again looking to key workers keep our country going, we’re delighted to have launched an advertising campaign with Creature and Clear Channel that captures and celebrates the skilled jobs that cleaners, care workers, security guards and delivery drivers do. There are nearly 7,000 accredited Living Wage Employers who are choosing to go above and beyond the government minimum and do right by workers and families. Despite it being a challenging time for business, we’ve seen over 800 more employers commit to the Living Wage since the start of the pandemic. However, there is more to be done with over 1.3 million key workers in the UK still earning below the real Living Wage. Today we’re asking those employers that can, to accredit as a Living Wage Employer.”

The campaign calls for more businesses to join the nearly 7,000 accredited Living Wage Employers, including over 800 who have signed up since the pandemic began, and commit to pay all workers a real Living Wage. The real Living Wage is independently calculated based on the cost of living. It means workers and their families can meet everyday needs: the weekly shop, a surprise dentist trip, a new school uniform for growing kids. Earning the real Living Wage is the difference between sitting down to a healthy meal and struggling to put food on the table. Between reading the kids a bedtime story and working late, multiple jobs, each night.

This campaign also falls during the Foundation’s annual Living Wage Week celebrations, November 9-15, 2020 with the new Living Wage rates due to be announced shortly.

The digital posters will be displayed across Clear Channel’s digital Out of Home advertising screens from November 9, 2020 for two weeks.

This entry was posted on Monday, November 9th, 2020 at 09:30 @437 and is filed under DailyDOOH Update. You can follow any responses to this entry through the RSS 2.0 feed. You can leave a response, or trackback from your own site.