OUTFRONT Media Inc. (NYSE:OUT) has launched its Black History Month campaign in partnership with 100 Black Men of America, Inc. titled “I’m Next,” which celebrates and supports black youth and black mentorship across the US. 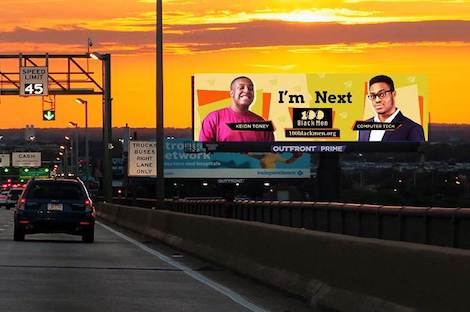 Michael Graham, Chair of Marketing & Communications Committee of 100 Black Men of America, Inc. said “We started our partnership with OUTFRONT through our Atlanta chapter and are thrilled to extend it nationally for Black History Month. It is a great opportunity for our mentees to see themselves, alongside their aspirations, on a public forum like billboards. This visualization aligns closely with our mission.”

Jodi Senese, CMO of OUTFRONT said “OUTFRONT admires 100 Black Men of America’s leading work on mentorship and its positive impact on the community” said “We are proud to support and amplify this important content on our very visible media network embedded in local communities across the country.”

The various artwork includes a photograph of the young adult, their name, and their career aspirations. The campaign, created by OUTFRONT STUDIOS, OUTFRONT’s in-house creative agency, is currently running on digital billboards across the country, with the young adults present in their respective hometowns; the cities include Baton Rouge, Chicago, Miami, Dallas, Los Angeles, Phoenix, Minneapolis, Philadelphia, and Oakland.

Click here to view their featured future leaders and to learn more about this campaign.

This entry was posted on Monday, February 7th, 2022 at 07:47 @366 and is filed under DailyDOOH Update. You can follow any responses to this entry through the RSS 2.0 feed. You can leave a response, or trackback from your own site.