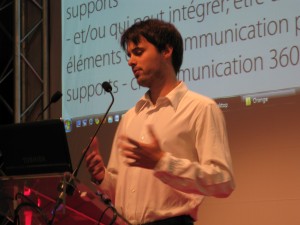 They were all asked about their experiences with the latest technologies and their vision of the future. This may have been over the heads of a lot of the audience as the bulk of the French market is still struggling with V 1.0… still, someone has to show the way.

Albert described JC Decaux‘s experiments  with interactivity between mobile phones and bus shelter screens and touch-screens in bus shelters in Paris , though admitted that they haven’t yet found the right business model. Concerning the future, since outdoor installations are covered by long term contracts of 10 – 20 years, he predicts that little will change over the next 5 years, though the digital part will certainly increase 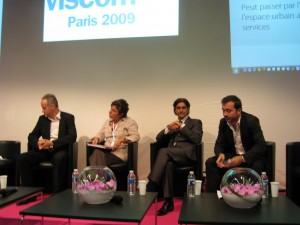 Stéphane emphasised the need to engage the public in local services & activities. It is essential to demonstrate to the public that the media is useful, or it will be rejected. He also reminded all stakeholders that there is a place for art in ‘outdoor’ media – installations should be attractive and respectful of the environment.

Olivier Debin stressed the need to develop an overall content strategy as a first step – this will then dictate what type of media is required to deliver it. He took the opportunity to announce the creation of the Digital Content Circle with Denys Lavigne, president of Arsenal Media in Canada, who was also present in the room. 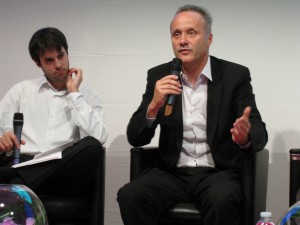 There was overall agreement that the future is interactive.

Olivier Debin sees the development of the 360° degree model – a mix of digital screens, mobile phones and internet – which his agency is already integrating into their various projects.

Finally, the consensus was that two kinds of networks will emerge:-

This entry was posted on Wednesday, September 23rd, 2009 at 10:34 @482 and is filed under Scuttlebut. You can follow any responses to this entry through the RSS 2.0 feed. You can leave a response, or trackback from your own site.