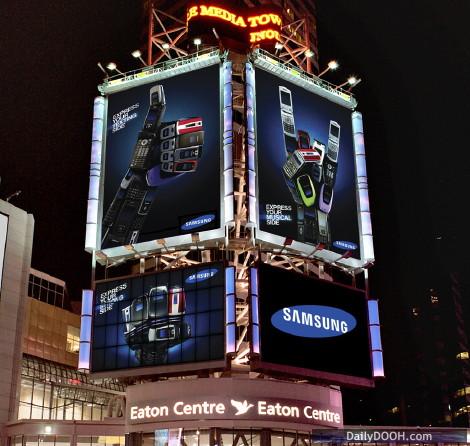 Responding to the increasing demand for high-impact campaigns in Dundas Square, OBN, the only national network of Video Boards in Canada, is offering advertisers short-term campaign options on the 18-storey structure that presents a spectacular, clean and uncluttered view of the heart of the city at Dundas Square.

Advertisers can now book shorter term campaigns with the ability to choose from several combinations of the tower components, that were previously available only on a long term basis and including all components. The change opens up the options for advertisers of all budgets to participate in the action at Dundas Square.

Samsung’s wireless division dominates Dundas Square using trivisions and video board components of the tower to launch its new campaign. The campaign asks viewers to express different sides of themselves using Samsung’s wide array of mobile phones that include texting and music capabilities. The campaign is running for six weeks.

This entry was posted on Thursday, May 22nd, 2008 at 06:40 @319 and is filed under Scuttlebut. You can follow any responses to this entry through the RSS 2.0 feed. You can leave a response, or trackback from your own site.