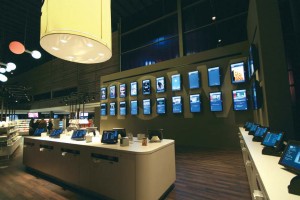 Belgian soft-and-hardware developer, dZine, which has already shipped some 90,000 players worldwide, announced that it has installed another 360+ of its solid-state players in Kinepolis multiplex cinemas across Europe since the beginning of the year.  Formed in 1997, Kinepolis now runs 23 complexes in Belgium, France, Spain, Poland and Switzerland. After initially experimenting with a couple of screens per site, then a successful full installation in the most recently built theatres, they decided to embark on a complete refurbishment of all sites, which will be completed by the end of 2010.

A Kinepolis spokesman told us “We were looking for an out-of-the-box solution which is easy to handle and which could be modified to fit our specific requirements. The solution uses our existing network, therefore a non MS Windows based player solution was preferred because of security restrictions and uptime. Each complex is managed by a local server. This server links seat information advertising- and database content together with the ticketing system for this specific complex.

The system not only replaces the old paper posters but can show film trailers as well. We also use it to display information and advertising, and especially to promote sales of confectionary.” 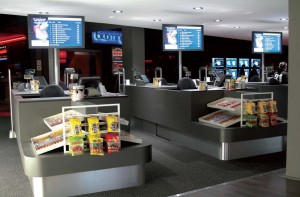 The most recently built complexes in Ostend and Bruges have sensors under the seats to detect when it is occupied. At the entrance to each room, a screen shows a seating plan – green shows people sitting in the right seat, red shows people in the wrong seat, and white indicates seats that are unsold.

“We consider installations in a cinema environment as one of our key markets. We can provide a secure and reliable DS solution whilst keeping an open mind towards customized integrations with third party back-office software and content databases.” said the nice man from dZine.

This entry was posted on Monday, February 15th, 2010 at 10:50 @493 and is filed under Scuttlebut. You can follow any responses to this entry through the RSS 2.0 feed. You can leave a response, or trackback from your own site.