After seeing Prysm’s technology for the second time in the space of 9 months (at #ISE2010 in Amsterdam in Feb 2010 and before that in June 2009 at InfoComm in Orlando) we asked a few weeks ago “Are Prysm As Far Along As They Claim?“.

Prysm has continued to get a lot of coverage in the media since #ISE2010 and almost all of it has been favourable – with most focusing on their claimed energy efficiency. 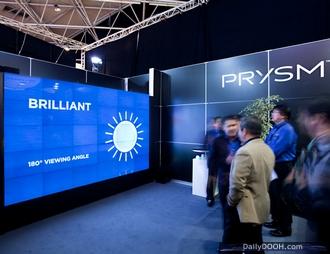 The coverage by and large has seemingly accepted everything that has been claimed in their press releases and brochures at face value, without that much analysis.

Now that Prysm has shown their units publicly (i.e. without NDAs), we think it worthwhile to take a more in depth look at Prysm’s technology and perhaps raise some questions that others (more technically proficient than us maybe) should be asking. I’m afraid this might get a bit heavy, but here goes:

There is no doubt that the power meter coupled to an individual cube unit in the display on show at ISE was demonstrating impressively low power consumption. Measuring in Watts, it was hovering around the mid twenties, and depended on what was being shown on the display.

To achieve this the lasers driving the display are modulated off to make the picture darker, rather than being constantly on like a fixed light source in a projector. In a lot of DOOH and control room type deployments the content could well be pretty static, and some with a lot of peak white in the picture, which is quite different to general motion video or TV imagery.

What we would really like to know is what would be the peak power consumption in these cases for a given screen brightness?

We were given the impression that outdoor applications were definitely on the agenda, and a figure of 1,000 nits was used. This was difficult to judge in a darkened booth, as the display wasn’t being driven hard (unlike some of the eye-burning LED boards at the show).

Was this value measured in cd/sq m across the whole display, could this be sustained continuously, and what effect would this have on power consumption?

As soon as phosphors on the screen was mentioned in the press release, a lot of people commented on the well known problem of burn in, especially for Plasma technology. This may well have been solved in this application, and reports from the show were that each phosphor is only energised for a relatively small amount of time during its life.

We’d like to hear some more clarification on this, and a realistic prediction of the overall life of the screen. Are there going to be any problems with static images being displayed for long periods?

The display shown at ISE had the phosphor mounted on glass screens. This felt quite familiar, like looking at a CRT screen. While the viewing angle was excellent, because of the flat glass screen surface, ambient light reflections were a problem. This could be mitigated with an anti-glare coating or by making the phosphor coated screens from a plastic based material.

What will be the chosen route for final product manufacture?

Prysm have said that the system is designed to use commodity parts that are reliable, well understood, and widely manufactured, so although this is a groundbreaking product, no new and difficult manufacturing process is needed. This makes a lot of sense, especially as going forward, being able to procure volume manufactured parts will help to drive costs down. The advances in small solid state lasers for consumer DVD and Blu-ray players and computer optical storage drives have certainly been good for this product. 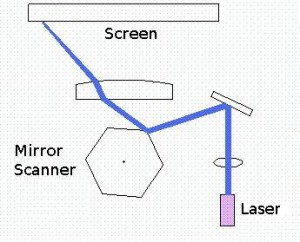 The system uses a laser printer-like set of optics to scan the laser beams across the screen, which involves a multi-mirrored drum being rotated continuously at high speed (upwards of 3,000rpm, or about half as fast as a hard disk drive). This is the part of the system which perhaps needs most scrutiny – this is the major mechanical moving part, and as such could well be the component which has the most impact on a number of areas.

We know that one of the least reliable parts of a PC is the hard drive, and although laser printers are reliable by comparison, even high duty printers aren’t usually in continuous use during their lifetime. For the LPD, the mirror drum has to be spinning when the system is on – in a lot of cases this will be 24/7 – which means that as well as reliability, factors like bearing wear during the lifetime may need to be considered and compensated for.

The problem isn’t so much worrying about the Mean Time Between Failure (MTBF) of an individual motor assembly, but in a large tiled display with lots of scanners in lots of cubes, the MTBF over the whole display can end up lower than that for a single unit (much like arrays of multiple hard drives in storage systems), as the probability of a single failure is increased. As there is only a single scanner in each cube and therefore no redundancy, a failure means a blank screen in part of the display.

The other obvious area on which the stability of the optics will impact is the quality of the image itself. The overall impression of the image quality when first seen is very good, but when you look for a while, you can see some scanline alignment problems, and some patterning in the image. It was said that improvements had been made to more recent units not on display at the show.

The system uses a separate laser and photo sensors to determine how much to adjust the timing of the laser beams to make sure they hit the individual phosphors on the screen accurately. This process needs to compensate for any small variations in the motion of the scanning mirror drum, and has not only to ensure that the image on a single cube unit is consistent, but that the image is correct across a whole display array.

The importance of this was highlighted at ISE, as during the show build up the halls of the RAI exhibition centre were rather chilly compared to the warmth during the show when the heating was on and loading doors shut. This, we heard, had posed a bit of a challenge to make sure the line-up was as good as possible on the display during the show.

Will this process be robust enough to do this in the wide range of operating situations that are likely to be encountered? Will the alignment system be able to cope with any environmental vibrations which could affect picture stability?

Are there any constraints on the orientation of the display cubes due to the potentially sensitive nature of the optics – can they be flown at an angle, or mounted horizontally to form a screen area overhead?

The current cubes being showcased are actually trapezoidal in shape, because the optics sit underneath the level of the screen, and the laser beams are reflected onto it via the rear of the cabinet. They have been designed to stack together so large modular displays are possible. When considering ease of maintenance in the event of a failure or damage, unfortunately this means you can’t pull a cube out of a display without lifting up all the ones above it.

In some installations, due to accessibility difficulties, this could either be prohibitively costly, or nearly impossible to partially dismantle a display. A possible solution, which would inevitably add to the cost of deployment, could be to construct a custom mechanical frame structure which would allow cubes to be raised vertically for maintenance of cubes lower down in the array.

Is it possible to service the units from the rear (although that might not be possible in all installations)?

Prysm talked about being in a position to manufacture and ship product soon, and certainly by InfoComm, which means in the first half of 2010. If this is to be achieved successfully, they need to be able to demonstrate significant advances and pretty soon. Only when pricing is announced will it be possible to seriously consider and compare the business case for using LPD technology.

Competing on two obvious strengths like low power consumption and price will not be enough to win against other screen technologies in their own right – all of the above factors will be taken into account by potential customers when weighing up their options.

A lot of the above is based on the current product as shown in the 25″ cube format, and we assume this is the product that will be first off the line. Prysm has indicated that the technology can be adapted to other sizes, and there has been talk in the press of an eventual consumer product – they describe LPD as a technology platform, not constrained to any one size. Certainly the high refresh rate achievable (240Hz) will lend itself well to possible 3D applications.

Whilst there are undoubtedly some really strong features of the LPD system, other display technologies are also advancing, and Prysm need to develop further and address their current issues to put themselves ahead of the others, with their new system as yet unproven in real world deployments. Only then will the system be competitive in the marketplace, however innovative the principles behind LPD.

This entry was posted on Monday, February 22nd, 2010 at 07:32 @355 and is filed under DailyDOOH Update. You can follow any responses to this entry through the RSS 2.0 feed. You can leave a response, or trackback from your own site.