Yesterday, with little or no advertising that we could see, NewBay Media ran their 2010 Virtual Conference for Digital Signage. Whilst it only had 8 booths and as best we could tell, something like 412 folks who actually logged on (not sure if that includes the exhibitors) it wasn’t too bad and with a bit of marketing could certainly be improved. 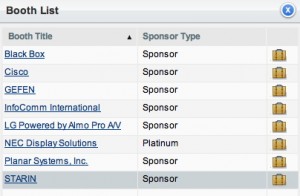 Dave Haynes told us “I don’t think this thing is entirely without merit, and hats off for trying it at least” and we’d fully agree with that BUT would have to point out that any onlne (virtual) conference is always going to be a numbers game – 400 folks online is pitiful when u think that several thousand actually make their way to Las Vegas or London for (proper) events!

It’s all down to marketing and exposure.

The online system they used was very good – it was a shame that their online system didn’t support Chrome but that wasn’t a show stopper and I expect that folks just fired up IE (yuk) , Firefox or Safari instead. The chat sessions were good, some of the women in the promotional videos on the booths very good looking and the vCard exhange of information worked really well – all told the whole thing held together quite well!

Quite why Cisco bother with these sorts of things is anyone’s guess. Everyone we know who tried to engage Cisco in pricing discussions about DMS left disappointed and none the wiser.

Who attended the event? Well one informed source told us “We would guess 10 per cent NewBay Media people (i.e. the organisers), 20 per cent end users, and 70 per cent biz dev, sales people and independent consultants sniffing for their own business!!” – perhaps that’s about right for any industry event these days (#CETW not withstanding of course).

We’d love to know what NEC and Cisco paid for their presence because the ROI justification would be tough at only 400 or so online (and guess what? Yep; it’s all measurable)?

The usual consultants were online; Lyle Bunn, as well as the international man of mystery and Laura Davis Taylor (ex-consultant now of course having previously been assimilated by the Carpet and Rug Institute as VP of Global Retail Strategy) but all did a good job promoting discussion.

Again, this is quite a good idea and I guess it’s a start.

This entry was posted on Wednesday, April 28th, 2010 at 17:58 @790 and is filed under DailyDOOH Update. You can follow any responses to this entry through the RSS 2.0 feed. You can leave a response, or trackback from your own site.