Digital out-of-home advertising , along with radio and television, are all playing a major role in a new multi-media branding campaign in the Greater Toronto Area for t.o.night free evening daily newspaper. 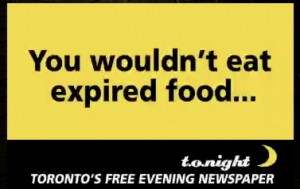 The paper is distributed every weekday, near downtown Toronto’s public transit hubs.

t.o.night Newspaper Group Inc., publishers of ‘t.o.night’, has launched the campaign to educate Torontonians across the GTA about the paper. To run over several months, the campaign is part of ongoing efforts to establish name recognition and familiarity with ‘t.o.night’.

“’t.o.night’ has become an essential part of many commuters evening routines, but this campaign’s focus is on attracting new readers,” says John Cameron. publisher. “’t.o.night’ is already staking its claim in the market, but now that we have been established for almost a year, this campaign will take us to the next level.”

The multi-platform campaign is believed to be unprecedented for free dailies in Canada.

“From our knowledge, never before has a free daily in Canada launched such an extensive campaign,” says Tom Hyde, senior vice-president. “This is something you would see from a paid-daily, but it is unique for a free daily.”

For television, CHCH has been chosen for its area code 905 (GO train riders) and area code 416 (TTC bus and subway riders) viewership, while AM640 has been selected for radio, targeting morning listeners on their way to TTC and GO parking lots.

This entry was posted on Wednesday, June 16th, 2010 at 08:30 @396 and is filed under Scuttlebut. You can follow any responses to this entry through the RSS 2.0 feed. You can leave a response, or trackback from your own site.