Without Cheese, There’s No Fun!

The Fédération des producteurs de lait du Québec (Quebec’s cheese producers) has launched a fall campaign that involved out-of-home and print, and while we’re not sure if digitalOOH is involved, we did notice that the recipes part of the campaign is available on mobile screens. 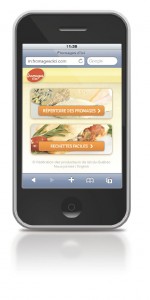 media strategy gives priority to the busiest metro stations and locations and out-of-home executions are also used in magazines, along with tempting recipes to jazz up macaronis, poutines, pizzas and soups. Web and TV are also part of the campaign, and the cheese recipes can be pulled up on mobile screens. In addition to 250 recipes, some of them available in video, the website ourcheeses.com contains tips and advice on how to appreciate and store cheeses, prepare a cheese tasting, serve raclette or a cheese fondue at a dinner party, and pair cheese with wine or beer. And as the site is now mobile, it can even be consulted while grocery shopping.

Three 30s TV spots, including an English version, tell stories in which ‘cheeses from here’ play an important role in situations like the purchase of a first home, the simple arrival of the weekend after a busy week, or the emotional return home after travelling the world.

This entry was posted on Tuesday, October 5th, 2010 at 10:00 @458 and is filed under DailyDOOH Update. You can follow any responses to this entry through the RSS 2.0 feed. You can leave a response, or trackback from your own site.