Christmas trees, fairy lights, red hats with white fluffy brims; they are all the range at this time of year. I bet you that the first Christmas glitter you see sparks a little smile (usually a sign of disbelief that it’s this time of year again), followed by the panic of ‘What do I need to buy this year for…’ – well, at least it does for me but I digress… 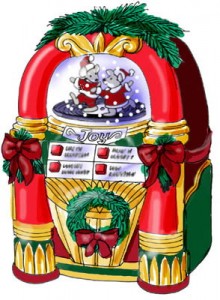 You nauseate me, Mister Grinch

Even when you try to ignore the signs by closing your eyes, you cannot close your ears; done well, Christmas songs can be of real benefit to retalers (see our Mood Media story here) but done badly they can be invasive and a real irritant.

Scottish music design company Open Ear has an alternative for retailers to make the festive season less traumatic. The company has launched ‘Winter Music‘ – a 24/7 internet radio station that plays nothing but the best in alternative Christmas music.

According to the company, “Taking a free online subscription, businesses and web users can save money and time usually spent on compilation CDs and ensure staff, customers and friends are not being aurally tortured by over-played Christmas pop songs and naff carol renditions.”

Open Ear’s ‘Winter Music’ selection provides the equivalent of 20 CDs worth of music for two weeks and encompasses the worlds of jazz, electronica, indie-pop and soul. Tracks include alternative takes on Christmas classics by the likes of Sufjan Stevens and James Brown, and more up to date numbers by the likes of Domino Records, Frightened Rabbit, Fleet Foxes and Malcolm Middleton.

In parallel the company started a Facebook page called the ‘Stop Businesses Playing Annoying Christmas Music Campaign‘ on November 29th 2010. So far there are 83 adepts, but no one dares to make much ‘noise’ with their comments.

Brian Harvey, Open Ear Managing Director, explained “We know that Christmas music provides an annual quandary for business owners and tends to divide consumer opinion. We’ve set up a Facebook  campaign to highlight these issues and created a web stream playing a great selection of ‘alternative’ Christmas tunes that is available for free for two weeks.”

This entry was posted on Tuesday, November 30th, 2010 at 08:44 @405 and is filed under DailyDOOH Update. You can follow any responses to this entry through the RSS 2.0 feed. You can leave a response, or trackback from your own site.