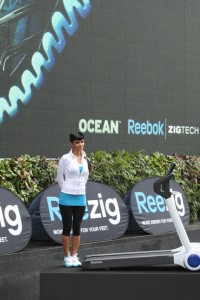 It started at 1pm when Nicole appeared in front of Ocean’s landmark screen for an open photo-call, with a few on lookers braving London’s early winter weather. She was wearing a tight thin sport outfit with the matching ZigTech trainers and her hair was up on a kind of 30’s Victory Rolls style that didn’t get the approval of the tabloid press.

Photo shoot done, she went into a private area where she  began modelling the ZigTech trainers and interacting with the public via two way cameras attached to the digital billboard, which even enable consumers to talk to Nicole through sophisticated production.

Reebok’s ZigTech trainers are labelled as the ‘energy drink for the feet’ because, according to the company, the technology allows key leg muscles to work less, so one can do more.

Ocean Outdoor explained the concept behind using the billboard is that, although billboards are customarily static, Reebok ZigTech give this billboard energy to bring it to life.

Richard Malton, Marketing Director, Ocean Outdoor, commented “At Ocean we understand the untapped possibilities that outdoor has to offer brands. Digital screens now allow advertisers to communicate a much deeper message and can be used to really innovate, as a media first this is fantastic and just demonstrates just what can be done with DOOH.”

Shoppers were also treated to Nicole’s latest single Poison on the big screen.

This entry was posted on Tuesday, November 30th, 2010 at 12:40 @569 and is filed under DailyDOOH Update. You can follow any responses to this entry through the RSS 2.0 feed. You can leave a response, or trackback from your own site.