LEGO Ad Pod Does Not Inspire

I’m (still) a big fan of LEGO and when you think of LEGO brand and what it stands for I’m not sure I necessarily like what has been done here. 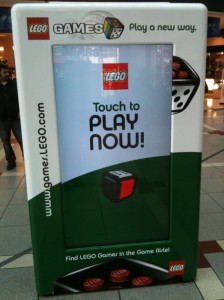 This Canadian campaign will run throughout the holiday season until the New Year reaching out to the mall consumer – the LEGO Games ad campaign is available at major malls, such as the Toronto Eaton Centre, Fairview Mall, Markville Shopping Centre and The Promenade Shopping Centre in Ontario as well as The Coquitlam Centre in British Columbia.

The LEGO version of the Ad Pod allows consumers to interact with LEGO products and games on-site but it looks so clunky. Where’s the creativity? Where’s the wow factor?

This entry was posted on Wednesday, December 1st, 2010 at 11:19 @513 and is filed under DailyDOOH Update. You can follow any responses to this entry through the RSS 2.0 feed. You can leave a response, or trackback from your own site.