As you know we have a major downer on rVue Holdings, Inc. (OTC Bulletin Board: RVUE) and their general OTT chest thumping, so to be fair in this case it may not actually be their fault that these things get written about them but we believe that there is some major pump and dump activity going on around them (just one of the many perils of being listed on an Over The Counter exchange or alternative investment market). 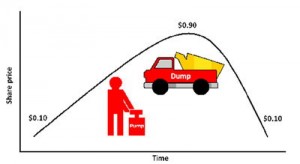 We quote from the research “According to Globalcom Investment Research, rVue Holding’s 2011 revenues are estimated to come in at $4 Million and grow to $200 Million in five years, which would represent an average 220% year on year growth rate. With that in mind, Globalcom rated the shares of rVue Holdings, Inc. a Strong Buy and forecasts a price target of $3.25 per share within twelve to eighteen months. This would represent a market capitalization of only $100 Million dollars.”

As we have said before “For what it’s worth, we think their idea is a GOOD one, however, we don’t see them getting the necessary traction on either the network side OR the advertiser side to make it profitable any time soon” and with new ways to plan, buy and sell online coming along shortly we’d strongly suggest that sensible investors keep their hard earned money in their piggy bank.

This entry was posted on Wednesday, December 1st, 2010 at 11:43 @530 and is filed under DailyDOOH Update. You can follow any responses to this entry through the RSS 2.0 feed. You can leave a response, or trackback from your own site.