‘Tis The Season To Be Jolly For Amscreen

It has been a busy year for Amscreen, the multi award-winning, independent digital signage operator established just two years ago, and there are no signs of a slow down for the company in 2011. 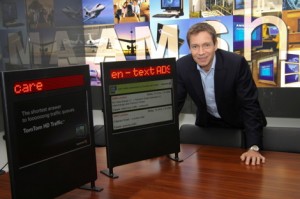 It's been a good year for Simon and team

Amscreen, whose networks broadcast to over 3,000 sites around the country, secured major deals with sponsors such as Tom-Tom and BMI Healthcare to provide live traffic and weather updates on their forecourt and healthcare networks respectively. Prestigious brand support continued as Sky provided live news feeds, ran pre-season football campaigns and in a first for digital out of home, used the nationwide networks to give live score updates for The Ashes.

As well as winning new advertising business such as Kia Motors and Renault, Amscreen saw repeat advertising from American Express, Visa, Camelot and Red Bull to name but a few. All the while, Amscreen continued to extend its national screen networks, in particular into the convenience sector with roll outs with the likes of CJ Lang Spar Scotland and Booker, helping to provide even more nationwide advertising opportunities.

At the start of 2010, Amscreen added Shell to its forecourt network and the year has been successfully rounded off with Moto Forecourt and WHSmith stores joining the fold in December. The latter joined other major network partners such as BP, MRH Retail, Motor Fuel Group and EuroGarages on Amscreen’s forecourt network, which currently broadcasts to over 40 million people each fortnight. 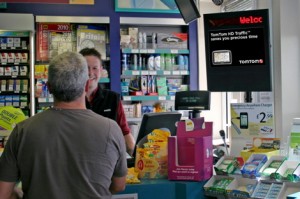 In addition, the healthcare network more than doubled in size during the year and Amscreen secured a deal with WHSmith Travel. Screens were installed in many of the chain’s retail outlets in airports and railway stations across the country and further expansion into more WHSmith Travel stores, already planned for the New Year, will more than double the audience size available to advertisers on this network.

The digital signage company also launched Linklocal, a service that allows local businesses to target potential customers automatically using an online template system to create and upload their own content to one of the 3,000 digital signage screens available across Amscreen networks, all at the click of a button.

Simon Sugar, Amscreen CEO, told us “I have been encouraged by the interest that the advertising industry and also our local businesses have shown in our networks. I am delighted to be working with our major advertisers in such challenging times in this market and I would like to especially thank Digicom, our national media sales partner, for all their efforts over the past year”.

The Loughton-based company’s success has of course not gone unrecognised by the industry either with them winning the Retail Systems award for ‘Best use of in-store marketing technology in retail’ for the firm’s digital screen network in BP stores, ‘Digital Signage Manufacturer’ at AV awards and ‘Best Digital Network’ at the POPAI awards.

Simon concluded “2010 has been a hugely successful year for Amscreen. With the co-operation of our network partners and dedication of our staff, not only have we secured several significant deals which have seen our forecourt and convenience networks expand dramatically, but we have also launched Linklocal and won three esteemed industry awards. With the support of all the teams at Amscreen, Digicom and our network partners I am confident that Amscreen will continue to lead the digital signage industry forward and that our success in 2011 will eclipse this year’s”.

This entry was posted on Sunday, December 19th, 2010 at 23:51 @035 and is filed under DailyDOOH Update. You can follow any responses to this entry through the RSS 2.0 feed. You can leave a response, or trackback from your own site.

One Response to “‘Tis The Season To Be Jolly For Amscreen”