LG Electronics had digital signage written all over its huge stand in Hall 11 at #iseurope last week. 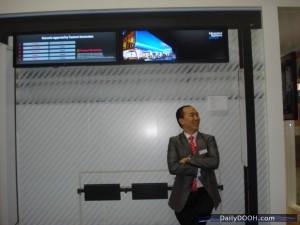 The company showcased several ways its monitors can be used for digital signage in different scenarios; from offices and pharmacies to their stretched displays for public transport applications and simple USB key operated screen for food stores.

LG introduced its SuperSign digital signage solution, which can be purchased as a standalone PC unit (NC1000) or a slot-in model (NC200) that fits the commercial screen range.

SuperSign also comes with its own content creation and scheduling software. Up to 25 displays can be controlled from one computer.

Also for hospitality, LG launched the EzSign TV, which can be used as a TV and for digital signage. The company was also showing screens with multi touch technology and its new 72” monitor, the 72WS10.

The 72″ screen can be placed landscape or portrait and was shown at the concept gallery at LG’s stand. It supports Full HD and boasts a 7000/m2 brightness, and 1100:1 contrast ratio. The application LG was showing was for an art exhibition where you could see the painting and at the same time have  the screen giving more information about the piece of art.

Finally, Yoo pointed out how the company had one over Samsung on its 47” LED Super Narrow Bezel video-wall. Its arch rival’s video wall is only composed of 46” panels.

This entry was posted on Monday, February 7th, 2011 at 07:56 @372 and is filed under DailyDOOH Update. You can follow any responses to this entry through the RSS 2.0 feed. You can leave a response, or trackback from your own site.