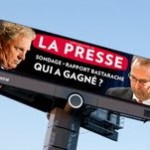 The impact of new technologies on the print media doesn’t only affect the type of editorial that columnists of the Montreal French-language daily La Presse address, but also shows, in the original way the newspaper has developed its latest advertising campaign.

Thanks to the extraordinary flexibility of the Astral Media Outdoor Digital Network, Cossette Communication-Marketing and La Presse have been able to unify print and digital media. 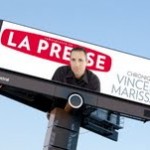 Every day, from midnight to 11 am, the lead story is displayed on 10 faces of the advertising network, reaching over 1 million people a day in the greater Montreal area.

After 11 am, it’s the turn of the columnists featured in La Presse such as Foglia Boivert and Marissal Petrowski to show up on the Digital Network, rotating with the main sections (Business, Sports, Arts and Entertainment, Holidays, Gourmet, etc.). 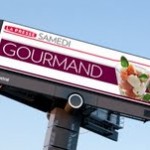 The campaign is managed and broadcast from Astral’s control center located in Montreal.

The creative for the lead story is received by the team at Astral only a short time before being shown at midnight.

Readership of this historic broadsheet daily newspaper is high, with over half-a million readers of its Saturday edition (NADBank 2009: 509,500).

This entry was posted on Wednesday, February 9th, 2011 at 10:00 @458 and is filed under DailyDOOH Update. You can follow any responses to this entry through the RSS 2.0 feed. You can leave a response, or trackback from your own site.