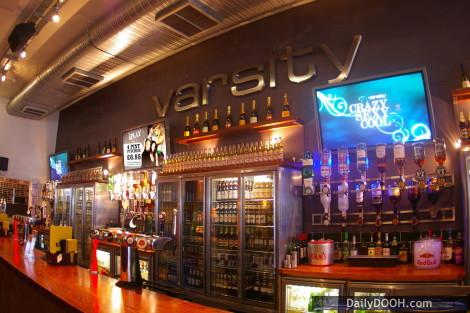 Famously publicity shy UK based Kaleidovision actually have something in the press – probably for the first time in about 5 years!!!

We have always been big fans of Kaleidovision’s creative studio and here we see a nice a campaign from them, aimed to coincide with the start of the new 2008 to 2009 academic year, rolling out across the Kaleidovision managed network in Barracuda Group Varsity Bars’ chain of 41 student bars.

This year’s promotion, titled Crazy Sexy Cool, encompasses a consumer competition to find the Face of Varsity 2009. All the channel content is focused on Barracuda’s VCard loyalty card, 650,000 of which were sold during the last academic year.

Kaleidovision animated the 25% discounts provided by the eight sponsor partners, which this year include Domino’s Pizza, Holiday Inn Express and Play.com.

Barracuda Group’s head of marketing Myles Doran told us “We constantly try to reinvigorate both the brand and the VCard, and sharpen up the offer. Kaleidovision brings the core creative media to life and takes it above the line with colour and the visual movement. Whether it’s drinks promotions, embedding partner logos or advertising Face of Varsity, KV has moved that element of the business forward dramatically.

It’s good to see Kaleidovision at last doing some PR as they have a great offering.

This entry was posted on Friday, October 10th, 2008 at 08:12 @383 and is filed under Scuttlebut. You can follow any responses to this entry through the RSS 2.0 feed. You can leave a response, or trackback from your own site.

One Response to “Crazy Sexy Cool”