Based in Redwood City, California, this start up has already been named as the ‘The World’s Most Valuable Mobile Advertising Company‘ by the Business Insider and now has offices in London, Israel & Australia.

Amobee’s core business has been Online & Mobile advertising however they have been pushing the envelope by combining the reach of traditional out of home (OOH) networks and the relevant personalized experience that Mobile devices offer consumers. 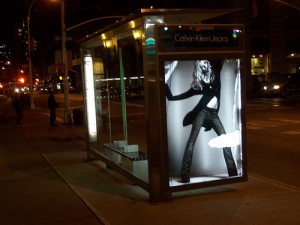 Harry Dewhirst, VP of Media Strategies for Amobee, has been spearheading this movement of interactive Mobile advertising infused with Digital Out Of Home (DOOH). Sparked by revolutionary concepts that allow media buyers to ‘pay for mobile ads based on performance’ or whenever a user interacts with traditional media through their mobile device. This technology enables Amobee’s customers to offer their audience an advertising experience that allows the consumer to interact with the brand via an SMS text message, via Bluetooth and even Wifi.

On the horizon, Dewhirst believes the ability to offer Real-Time creatives on the networks of dooh screens will offer new opportunities for advertisers in the future that will allow the conversation between brands and consumers to continuously evolve. Mobile advertising is the way to facilitate personal experiences for consumers that tie in all levels of an ad campaign from Print, to Radio to TV to Online.

With the introduction of NFC (Near Field Communication), in the Google Nexus S and Nokia’s C7 the future of mobile device communication still remains uncertain however many unreleased smart phones like Samsung’s Galaxy, Apple’s iPhone, RIM’s Blackberry Torch 2, Dakota & Apollo are all rumored to include NFC technology.

Mr. Dewhirst is scheduled to speak at the Digital Out Of Home Forum and Awards on April 14th in New York City.

This entry was posted on Wednesday, March 9th, 2011 at 07:33 @356 and is filed under DailyDOOH Update. You can follow any responses to this entry through the RSS 2.0 feed. You can leave a response, or trackback from your own site.