As we mentioned back in February we recently published our first ebook ‘ISE 2011 Twitter Hashtag Analysis‘ as we continue to explore all that is Kindle. 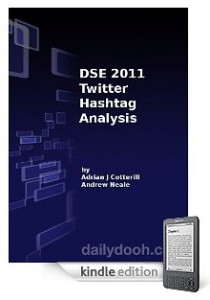 That went so well that we’ve done it again, this time with our ‘DSE 2011 Twitter Hashtag Analysis’.

The surprise of the detailed analysis was, that for once, we were NOT the supreme twitter champion at an industry event. The analysis showed that there was a new number one in terms of tweets and new numbers one and two in terms of impressions.

As usual the report gives a clear indication as to who was active at the event and how well the hashtag fared (and it’s derivatives – though there were far fewer deviations than normal thanks to some excellent policing by the organisers and ourselves). Twitter traffic for the event was also incredibly high AND we mean ‘incredibly’.

Once again we hope that the price tag of a whopping USD 9.19 won’t put off those show and event organisers and the marketing folks in the bigger corporations from taking a look.

If you don’t have an actual Kindle device, Kindle reader apps can be downloaded for Android, iPhone/iPad, Windows Phone 7, Blackberry in the US and for PC and Mac on Desktops – one of the reasons why we chose to publish using Kindle and not some other mechanism!

You can purchase the DSE 2011 Twitter Hashtag Analysis in the US store here or in the UK store here. As always, feedback welcome.

This entry was posted on Wednesday, March 9th, 2011 at 09:41 @445 and is filed under DailyDOOH Update. You can follow any responses to this entry through the RSS 2.0 feed. You can leave a response, or trackback from your own site.