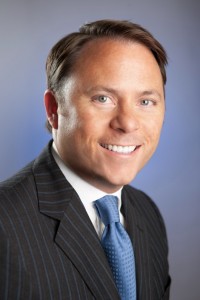 “That’s what makes it so great. This offers a terrific opportunity to reach the so-difficult-to reach business executive, and not just once, but multiple times on one trip.”

EMN fits into RMG’s stable of networks well, with its one-to-one relationship with its viewers, its usually long dwell time (average 30 min.), and its screens offering a combination of sight, sound and motion – all features of most of RMG Networks’ properties.

McGuire says that almost all staff will be retained, with Ben Little, CEO of EMN, running the full airline division. Suzanne LaForgia of RMG and Gerry Jones of EMN will be executive vice-presidents of sales, east and west, respectively.

What interested us most in our chat with McGuire, though, was learning that this is very unlikely to be RMG’s only acquisition this year. The well-funded RMG, with its eye on growth both nationally and internationally, is in negotiations with two other digital place-based companies as possible acquisitions, both of which could be a fait accompli before the end of summer.

While we can only guess at which companies could be targeted, we get the feeling that at least one might be in the area of point-of-care, either at the pharmacy/drugstore level where RMG already has screens in more than 700 pharmacies, or in doctors’ offices where it now has about1,100 screens.

“We’re interested in the fastest growing DOOH sectors,” McGuire told us. “These are in four sectors: transportation, cinema, POS and POC. And we’re interested in profitable companies. I’d say there are about 220 networks in the U.S.. We’ve looked at at least 50 or 60 of them and only about 10 are profitable.

Outside of the U.S., RMG already has an office in Beijing, and McGuire also told us that both China and India are on its radar for growth in the near future.

This entry was posted on Tuesday, April 12th, 2011 at 10:00 @458 and is filed under DailyDOOH Update. You can follow any responses to this entry through the RSS 2.0 feed. You can leave a response, or trackback from your own site.

One Response to “RMG’s McGuire On Current And Future Growth”