While the number of exhibitors at Customer Engagement Technology World in San Francisco has increased 25%, the show somehow seems smaller than Kioskcom held a year ago in Las Vegas. 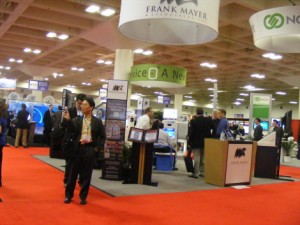 Whether this is due to the larger space accommodating the exhibitors, or whether due to no great in-rush by the reported 3,000 visitors registered to attend, we’re not sure. With many speeches held in rooms outside the main exhibit hall, perhaps the crowds are more spread out.

However, while the large exhibitor booths near the front of the hall seemed to entice a lot of visitors, none seemed overcrowded, and several of the booths in the middle and back of the hall were claiming either ‘a trickle’ of visitors or ‘disappointingly few’ and ‘almost none’.

We’re not sure of the reasons. Is it the first year blues’ in the new location? The fact that San Francisco is a more expensive city in terms of hotel prices than Las Vegas? The location of the booths in question? (Although we heard that one training session had only three people in attendance, too.) Or was it held too close to other major industry shows?

It can’t be for the lack of trying by Lawrence Dvorchik and his crew. In fact, they’ve made a myriad of improvements. For example, the ‘Tech Talks’ sessions held near the back-of-the-room exhibitors are surrounded by a clear, heavy plastic, allowing lots of light and the ability to see in and out while muffling sound. 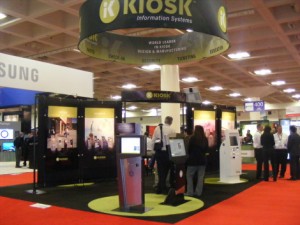 And we are mightily impressed by the efforts being offered by Dvorchik to answer questions and help visitors link up with the type of exhibitors that they most want to see.

The Wi-Fi equipped Digital Screenmedia Association lounge area outside the exhibition hall and the small blogger lounge inside are a great help to the official and unofficial press alike.

Let’s hope that the second day of the event will find more visitors wending their way to those previously unvisited sectors. A job for a wayfinding kiosk, anyone?

This entry was posted on Thursday, April 28th, 2011 at 09:59 @458 and is filed under DailyDOOH Update. You can follow any responses to this entry through the RSS 2.0 feed. You can leave a response, or trackback from your own site.