London black taxi cabs are getting a raft of technology updates it seems. News in just this week for example is that UK mobile (cellular) network provider Vodafone is all set to allow its customers to use their mobiles to pay taxi fares. 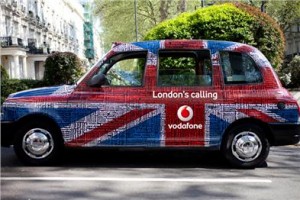 Charger equipped taxis will be wrapped as well

This follows on from the news a month or so ago that VeriFone Systems, Inc. is attempting to come to the UK with a combined screen plus payment system in no doubt somewhat competition to the old Cabvision system.

News also reaches us that London based Cabvision is all set for a re-launch. Its numbers of screens in the back of black taxis has dwindled somewhat these to a little over 750 and with a new owner (so we are told) and fresh impetus it once again wants to make an impact.

Those who have seen the new Cabvision and heard the new plans have been impressed so it will be interesting to see it for ourselves.

Vodafone’s announcement is simple enough; it’s equipping 500 London black cabs with chargers for a range of mobiles, including iPhones and BlackBerrys and introducing a scheme that allows passengers to send a text with the vehicle’s licence number to a central code and the amount owed is charged to their phone account.

Guy Laurence, chief executive of Vodafone UK was quoted as saying “We are committed to offering London the best possible network. We have already made hundreds of improvements to increase coverage, capacity and reliability to ensure Londoners can always stay in touch with friends and family. Now with our fantastic fleet of Union Jack cabs and their on-board chargers which anyone can use, all Londoners will be able to see our continuing commitment to the capital.”

Vodafone’s solution seems simple and straightforward and we’d expect would steal some of Verifone’s thunder (even before the latter makes any impact in the London taxi marketplace). Wrapping the taxis (on the outside) as well makes a lot of sense and it surprises us that other wannabee vendors haven’t thought about doing this before (or perhaps they just didn’t have deep enough pockets).

This entry was posted on Tuesday, May 3rd, 2011 at 08:36 @400 and is filed under DailyDOOH Update. You can follow any responses to this entry through the RSS 2.0 feed. You can leave a response, or trackback from your own site.