Christie MicroTiles were recently awarded the PALME Middle East Award for Most Innovative New AV Product of the Year. 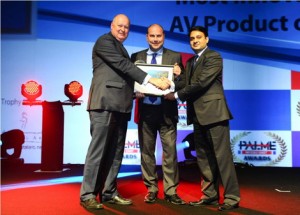 Christie MicroTiles are of course no stranger to the limelight having received a dozen awards and distinctions across Europe, Middle East and Africa since the launch of the product in the region back in February 2010.

Awards now include Most InAVative Digital Signage Product from the InAVation Technology Awards 2010, the Institut Français du Design (French Institute of Design or IFD)’s ‘Eco-Design’ honours – an award which recognises only the most wholly ‘Green’ products, right from conception all the way through to usage.

Recent deployments for Christie MicroTiles in the Middle East include the HTC phone launch and the opening of the Armani Hotel, both in Dubai.

In awarding this prize, the PALME Middle East panel of judges cited, “the quality, design, power of operation and rich list of features provided by Christie MicroTiles.”

This entry was posted on Tuesday, May 3rd, 2011 at 09:17 @428 and is filed under Scuttlebut. You can follow any responses to this entry through the RSS 2.0 feed. You can leave a response, or trackback from your own site.