Sharp Electronics Corporation is showing its new PNV 602 high brightness for displays and videowalls, its thin bezel screens, and its interactive boards. 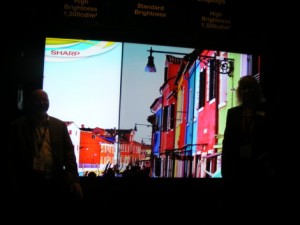 The high brightness property is evident in side-by-side boards and really evident in three adjacent screens. It involves the local dimming of backlights, turning off when the dark colours of a screen aren’t needed and giving a higher control ratio up to a million-to-one. It also means less powe use.

“It plays right into Sharp’s green company message of ‘Energy saving and energy creatig,” says Ellin Everson, senior manager, strategic marketig and cmmunications division. “It’s especially good in places where the screen in window facing or there is a lot of natural light coming in.”

The product will be launched in September.

The thin bezel screen was launched several months ago but the company wanted to display it to a new audience and notes the it will be used at the Sept. 9/11 Museum opening this coming September 11.

The company offers 60″ and 32″ interactive boards and is adding a new 70″. It is based on the Four Winds Interactive platform. Its other products use the ComQi (formerly known as Enqii) platform or the company’s own Sharp SDSS software.

This entry was posted on Thursday, June 16th, 2011 at 05:23 @266 and is filed under Scuttlebut. You can follow any responses to this entry through the RSS 2.0 feed. You can leave a response, or trackback from your own site.