To promote the launch of the UK edition of the Huffington Post, the US news and current affairs website, Out of Home communications agency Posterscope, creative agency MBA, media agency Total Media, OOH media owner JCDecaux and Place-Based Social Media provider LocaModa have partnered to create and implement a dynamic digital OOH campaign that reflects the ‘real-time’ nature of the brand. 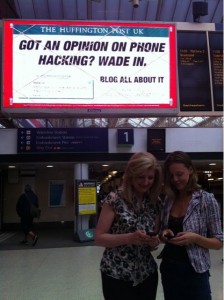 The OOH campaign, appearing on JC Decaux’s Transvision network and Digital 6 sheets across a number of mainline rail termini across the UK, invites the public to tweet their opinions and views on news topics which change on a daily basis throughout the 10 day campaign. The tweets are then played out live on the screens via a genuine automated system.

The activity forms part of a wider campaign which includes mock newspaper stand sellers encouraging commuters to “blog all about it” at the Transvision stations ,as well as press, taxi and online advertising all directing consumers to the Huffington Post UK site.

Kir Sandom at Posterscope said “For us this is a fantastic example of user generated content utilising’ real time’ messaging to bring the brand to life.”

Pedro Martins, Director at Total Media, said: “This media first using LocaModa is an exciting step in the evolution of partnerships between traditional and social media, which re-enforces – at the heart of it – Huffington Post’s USP. The concept of driving feedback and opinions about the most current headlines, especially at such a pertinent time for media commentary, is generating buzz beyond the campaigns execution.“

Stephen Randall, CEO LocaModa concuded that he was very excited that Posterscope and JCDecaux chose the LocaModa platform to enable such an important launch for The Huffington Post, telling us “This campaign combines the best of off-line and on-line attention-grabbing strategies – traditional newsstands and filtered real-time Tweets. It’s a fun and effective design. “

This entry was posted on Tuesday, July 12th, 2011 at 10:08 @463 and is filed under DailyDOOH Update. You can follow any responses to this entry through the RSS 2.0 feed. You can leave a response, or trackback from your own site.