Apart from the obvious, being able to spend two days in Monte Carlo, one of the big draws for me personally in attendng the Social Media Marketing and iCommerce Summit 2011 was the day two keynote by Tim Campos, Facebook CIO. 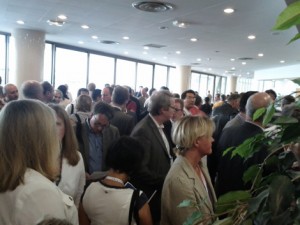 How dissappointed I was then with that but how lucky how great day one was (more of that later).

Facebook perhaps is such a size, such a giant, such a brand that it doesn’t need to try. I was probably expecting an Apple’esque style presentation but was treated to a series of grey slides with an underwhelming visual representation of Facebook traffic “done by an intern” running alongside.

Tim started off explaining how he got the job as CIO and how his social network and the trust levels represented therein helped .. although in silicon valley it’s hard to see how it could be any other way and we’d suspect that LinkedIn would have been more use than Facebook in this instance – still I guess if you work for Zuckerberg you soon learn to walk the talk and see your career and choices made through the usual rear view mirror.

Most of the presentation was about numbers, connections, minutes of this, terabytes of that and (interestingly) rather defensively lots of “how hard it would be” and “how long it would take” to replicate (ie copy) the global directory (for that is what it is) that Facebook has become.

Tim’s understanding of marketing is either poor or he has been drinking the Facebook Kool Aid as his slide on marketing consisted of paid for advertising (he listed Print and TV and no mention of online or OOH), word of mouth, PR etc and at a stroke came to the conclusion that brands on Facebook somehow had the power of all their fans behind them.

He ended with the slide “what are u going to do to socialise your business?” but had given the audience no clues as to why anyone would want to AND more importantly how this would fit into a proper real world marketing mix and not just some Zuckerberg Kool Aid vision of the world and their brands.

This entry was posted on Wednesday, July 13th, 2011 at 09:53 @454 and is filed under DailyDOOH Update. You can follow any responses to this entry through the RSS 2.0 feed. You can leave a response, or trackback from your own site.