Socialite. Why Did It Take Three Years?

According to wikipedia “a socialite is a person who participates in social activities and spends a significant amount of time entertaining and being entertained at fashionable upper-class events” and so we think it’s perhaps a very strange name for a network of portrait screens in Revolution bars and the Australian themed bar chain Walkabout. 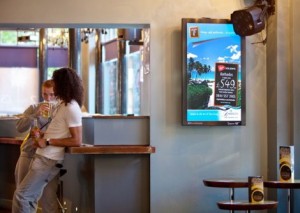 Socialite is INACCURATELY described by Clear Channel UK as “the UK’s first urban social network of digital screens in pubs and bars across the UK” – drop in the word ‘portrait’ to that sentence and they might have something but both Avanti Screenmedia (now defunct of course) and Kaleidovision have had 600 venue strong Pub / Bar Networks since 2004.

Okay so perhaps ‘socialite’ is one of those sort of words where the strict meaning is shifting in these modern times. We understand how everyone involved is trying to raise brand perception with the association but bottom line the term ‘socialite’ works in upmarket bars (Clear Channel do claim ‘premium independent bars and pubs’ as part of their 180 venue network) but come on, ‘socialite’ sounds awfully out of place in a Walkabout.

Clear Channel UK CEO Rob Atkinson said last week at some party (we weren’t invited to) “We’re going to deliver advertising to over 650,000 people throughout the UK through Socialite screens in pubs and bars” mind you back in May 2008 he ALSO said and we quote “Clear Channel Socialite will be the first premium in-bar advertising screen network of high quality, portrait digital poster sites with the capability of streaming static, animated, full motion video and real-time content in pubs and bars”.

Yes it was well over three years ago (see our original story here) that we had one of the first sneak previews of their proposed Socialite network. At that time they partnered with Inspired Gaming Group PLC to install what should have been a ‘nationwide network of premium digital screens in pubs and bars’, promised that the service itself would launch in September 2008 with a target of some 1,000 digital screens to be in place by the end of 2008.

Their ‘stretch goal’ was a network of more than 3,000 venues at some future point in time yet here they are three years later with a piddling little footprint of 180 venues.

We are very surprised that heads haven’t rolled for such a monumental cock-up (but hey perhaps they did? New CIO Tony Mather, who we hear good things about, joined in the summer of 2010).

Pre-Mather at least then, Clear Channel have had a very poor history with digital rollouts; we have all seen ill-timed joint ventures with VMG to get digital into shopping malls and incredibly stupid technology choices with the likes of Magink that plainly were never going to work in the UK – even their BARCO digital roadside rollout has seemingly gone nowhere.

This entry was posted on Monday, August 8th, 2011 at 11:43 @530 and is filed under DailyDOOH Update. You can follow any responses to this entry through the RSS 2.0 feed. You can leave a response, or trackback from your own site.