At the end of last weeks EMEA Scala conference, we sat down for a relaxed chat with outgoing Scala CEO Gerard Bucas. 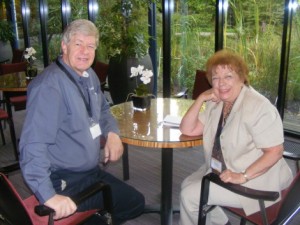 A citizen of the world who has lived and worked in several countries, Bucas held senior positions in several global companies including Olivetti, Commodore, GVP (his own firm), and then Scala, which he literally saved from bankruptcy and grew into the global company it is today.

We chatted a bit about what Bucas expects to see Tom Nix, named new CEO, do, and, since Bucas will continue to sit on the Scala Board of Directors, we expect that he’ll still be watching and dispensing advice based on his expertise. But that will leave him a lot of free time.

So what’s next? After our chat, we fully expect that, in the new year, Bucas will begin developing a plan for getting into some kind of new venture, and we’re sure that it will have the potential to go global, if it doesn’t exist as such already.

“Although I am retiring from Scala, ‘leisure’ is not my strong suit,” says Bucas. “So I am sure I will find one or more new challenges/ventures to dig my teeth into, and you can be sure it will be global as that is what I do best.”

We’ll be looking forward to it, Gerard!

This entry was posted on Sunday, September 18th, 2011 at 14:10 @632 and is filed under DailyDOOH Update. You can follow any responses to this entry through the RSS 2.0 feed. You can leave a response, or trackback from your own site.