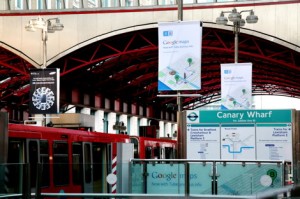 Samsung will be showcasing its new Galaxy SII smartphone, whilst Google will showcase Google Transit, a new service from Google Maps featuring public transport directions for London which we featured here back in July.

Both campaigns will be enabled to use the new Google Goggles technology which attempts to bring together offline outdoor advertising with online content (activated when a smartphone user takes a photograph of one of these out-of-home advertisements with Google Goggles).

The Samsung adverts will direct consumers to a competition offering the public the chance to win models of the new Galaxy SII Smartphone as well as (rather boring we think) enabling them to view more information regarding the new device via a video optimized specifically for mobile viewing (wow! Not).

James Rothwell, marketing manager at Google UK told us “We’ve had an overwhelming response this summer to our transport route information on Google Maps in London, and believe the interactive addition of Google Goggles to this will be both useful and fun for London commuters. This is the first time we have created a campaign that is Google Goggles-enabled, so we are very excited about it.”

The two campaigns will run on CBS Outdoor UK’s traditional and digital LCD screens at Canary Wharf’s DLR station taking over both the platform level and lower floor (the lower floor is the retail thoroughfare joining the Canary Wharf shopping areas together).

This entry was posted on Monday, October 3rd, 2011 at 17:11 @757 and is filed under DailyDOOH Update. You can follow any responses to this entry through the RSS 2.0 feed. You can leave a response, or trackback from your own site.